The death of Debbie Reynolds a day after her daughter Carrie Fisher is quite shocking, and yet strangely appropriate. This mother-daughter relationship, so public through Carrie’s books and joint interviews, is a magnified larger than life version which nonetheless provides truths to many mothers and daughters. As an exercise in astrological interpretation, it is priceless as much for the questions it raises as the answers it provides.

On the surface of it, the time of Debbie’s decumbiture is “better” than Carrie’s, simply because it is more common to call 911 in a medical emergency than to have the pilot of an airplane do the equivalent. 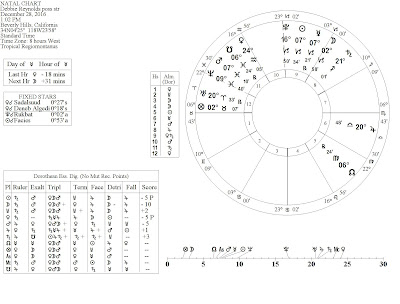 We know that Debbie complained of problems breathing, and here is Jupiter in the 6th. Jupiter is generally given as a ruler of the lungs. Mercury ruling the 6th is given as the ruler of lung disease by Partridge and Kirby-Bishop. This already changes the interpretation of the 6th house away from the first blush, in which we were told that she was a victim of a possible stroke. Stroke by its nature is more Mars-Sun, as it involves the brain, which, located in the head, would have an Aries rulership, where Mars is the domicile ruler, and the Sun the exaltation ruler. When a decumbiture chart fully matches the sign and rulership descriptions, it is a hint that the chart is really worth noticing. There were other calls to 911 that afternoon – but not all of them had fatal consequences. It’s the ones that match that tell you they are the ones with the most extreme consequences.

Venus was the Ascendant ruler – and Debbie’s natal Ascendant was in Libra, so Venus had special meaning for her.  The alternate sign (here, Taurus, but natally, Libra), doesn’t seem to matter.  Venus in Aquarius was peregrine: it was weak, which again is descriptive. What else are you going to be the day after your daughter dies? Venus will make no more aspects before leaving Aquarius, although the Moon will conjoin Venus before Venus reaches Pisces.

In fact, we have a chart where  the 6th and 8th are extraordinarily inter-related. The usual reading of cross relations is that the Querent will have the disease unto death, meaning that the disease will never be cured, but not necessarily kill the person. So, when stroke was being floated, it would be reasonable to say that the probability would be that she wouldn’t recover, at least fully. And this would have been a reasonable prediction for an eighty-four year old woman.

However, some of our sources give the interaction of 6th and 8th as an argument of death. So when is it chronic, and when is it death? That’s what needs to be sorted out. In what is surely one of the more unusual astrological events, Jupiter translates the light from Uranus to Saturn! This adds the danger of a sudden event to our description of the circumstances. So we have this translation, we have a perfection between a 6th house planet to an 8th house planet, where the 8th house planet has dignities in the 6th, and the 6th house planet rules the 8th, and Jupiter and Saturn are in mutual reception by sign and exaltation: it is completely over the top!

Then, we have the metaphor of the waning Moon, with Mercury ruling the 6th in a partile conjunction (cazimi!) with the Sun. Planets conjunct are burned up: they are annihilating the old in preparation for the new cycle. But the phase is the death of the Moon. 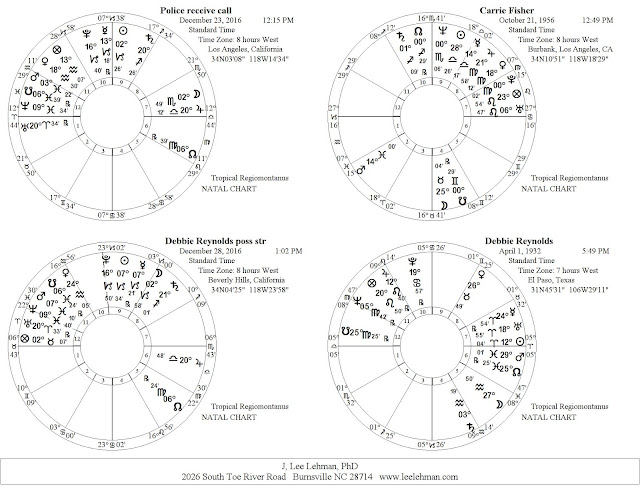 So this chart has gone from maybe benign to actually quite extreme. But it gets more-so. Now add Carrie’s decumbiture.  The Sun at 2 Capricorn is now replaced by the Moon at 2 Capricorn! The Part of Fortune, being a hylegical point, does represent in part the physical body is posited in a partile trine to that degree. Could this be anything but the moment?

Noting that Debbie had just had her Uranus return, I have come to wonder whether one function of this return isn’t to “loose the bonds”  with earthly existence: not necessarily to die, but to create a space in which it’s easier to let go.

The death of a parent is a pain that rarely leaves. The death of an adult child is even more so because our minds cannot accept that it should happen. Debbie’s life was an exemplar of unsinkability. Until now.