The 960 Year Cycle that Couldn't


Great conjunctions are any series of conjunctions between superior planets only. This is the system in Western astrology that moved the study of mundane past the yearly agricultural cycles into the longer cycles necessary to understand culture as an historical process, not merely a seasonal one.
The idea of longer periods was not new: the Babylonians had divided the world into three time periods as early as 1000 BCE.1 But it wasn't until a couple of centuries later that the Babylonians achieved the ability to predict the planetary positions in advance: an impressive technological advance, but one that drew away the power of the gods and goddesses to write new messages in the sky.2
What differed with the Arabic material was greater precision in the ability to calculate forward and backward, and its relation to only one astrological phenomenon: the successive conjunctions of Jupiter and Saturn. The full Jupiter-Saturn cycle was declared to be a great mutation of 960 years, which, at 20 years per conjunction is a total of 48 total conjunctions, averaging 240 years per element. Quickly doing the math, 12 conjunctions per element should mean four conjunctions in each sign per pass – but this doesn't work out so neatly in practice. For example, in the just completed Earth Triplicity mutation, there were actually nine conjunctions in Earth – three to each sign. According to Masha'allah (fl 762- ca. 815) in On Conjunctions, Religions and Peoples, each change of element (mutation) was associated with changes in government.3 These ideas were further elaborated to include both political and religious changes.4 Not only was the Triplicity considered, but also the Quadruplicity:
“If their [Jupiter-Saturn] conjunction is in
It is almost impossible to overemphasize how important the triplicity of the conjunctions was in interpretation. Abu Ma'shar (c. 787-886) discussed this in detail in his work, On the Great Conjunctions.6 He specifies that the sign in each triplicity that is furthest from Aries is strongest: thus, Sagittarius is the strongest fire sign, and the same for Pisces, Aquarius and Capricorn. This idea of the relative strength of the three signs within an element is also applied in medical astrology.
Abu Ma'shar was clear in stating that the understanding of the Jupiter-Saturn cycle was concerning beginnings, because this combination brings order. Mars added to the series shows destruction, which produces the end of things.7
How accurate is this description of the cycle using our modern astronomical equations? The results are shown in Table 1.
Table 1. Iteration of the “960 year” Jupiter-Saturn cycle in practice. This shows the first conjunction within the fiery Triplicity in each era.

The first problem we encounter is the presumption that the first instance of the Fire signs, considered the starting point of this cycle, would always fall not only in Aries, but in the first Face (i.e., 10 degrees) of Aries, or at least some fire sign. It doesn't. For the cycle beginning 1603, none of the conjunctions occurred in the first ten degrees of Aries. So does that mean that round doesn't count? We're still in it in 2010!
If we restrict the positions to the first Face of Aries, and not the first conjunction in the Fire signs, then we get the following results:

Table 1a. Iteration of the “960 year” Jupiter-Saturn cycle in practice, allowing only Aries as the starting Fire sign.
Here we see that the presumed length of the cycle of 960 years leaves a little bit to be desired when it comes to accuracy! Either, you can have a fairly regular cycle of about 784-785 years using the "Aries only" rule, or you can have an irregular length progression of the signs through the elements, beginning with the first occurance in the element fire. In practice, this doesn't really change very much, except that we note that the transition between elements can sometimes be a bit messy, with a couple of backs and forths – and this challenges the definition of the cycles, especially since Aries is not necessarily the first Fire sign in these progressions. It also challenges history, because contemporary astrological writings confirm that 1603 was treated as the beginning of the new cycle.8
What are we to do? I think the first thing is that we simply have to acknowledge that the cycle isn't as regular as it was historically proclaimed. I am reminded of how the ancient Chinese wanted to base their calendars on the 12 year Jupiter cycle – except that it isn't precisely 12 years! Or how the ancient Egyptians used the Sothic cycle based on the heliacal rising of Sirius – giving a 365 day year precisely that also slipped over time.
This brings up the point that “almost equal” doesn't make it as a calendar system over time. In this case, I think we need to go with the actual usage: first time in an element for the Jupiter-Saturn conjunction, it's a mutation. First time in a fire sign, it's a great mutation – the beginning of the entire cycle. Now, we can all use our computers to figure out the cycle length – we don't have to guess.
--
Footnotes
1 “BCE” stands for “Before Common Era” and is the currently preferred term for what used to be called “BC.” The date source is: Campion, 1994, pp 86-87.
2Campion, 2008, p 75.
3 Kennedy, E. S., et al. The Astrological History of MashA'allah. Harvard Monographs in the History of Science. Cambridge, Mass.,: Harvard University Press, 1971.
4 Burnett, Charles, Keiji Yamamoto and Michio Yano. Al-Qabisi (Alcabitious): The Introduction to Astrology. London: Warburg Institute, 2004.
5 Abu, Ma'shar, Keiji Yamamoto, and Charles Burnett. On Historical Astrology : The Book of Religions and Dynasties (on the Great Conjunctions). Islamic Philosophy, Theology, and Science,. 2 vols. Leiden ; Boston: Brill, 2000, p 55.
6 Abu, Ma'shar, Keiji Yamamoto, and Charles Burnett, 2000, beginning p 31.
7 Abu, Ma'shar, Keiji Yamamoto, and Charles Burnett, 2000, p 7.
8See for example, Edlyn, Richard. Prae-Nuncius Sydereus an Astrological Treatise of the Effects of the Great Conjunction of the Two Superiour Planets, Saturn & Jupiter, October the Xth, 1663, and Other Configurations Concomitant : Wherein the Fate of Europe for These Next Twenty Years Is (from the Most Rational Grounds of Art) More Than Probably Conjectured, and the Success of the Present Design of the Turk against Christendome Occasionally Hinted At. London: Printed by, 1664.
Posted by J. Lee Lehman at 11:01 AM No comments:

The Pope and the Sexual Molestation Scandal.

The extent of the child molestation scandal against a series of Catholic priests is just breaking, and increasingly, the Pope is being implicated as yet another church administrator who wanted the problem to go away. For this, we can examine the Aries Ingress for 2010 calculated for Vatican City, although the scandal broke a bit before that. It is difficult to come up with a chart for the problem itself, because some of the cases being discussed date back to the 1950s. But also, one has to acknowledge that the church policy of celibacy may have some bearing on these cases. While it may be in the interests of the Catholic hierarchy to attempt to distract people from the heinous crimes and cover-ups within their ranks by focusing on the fact that so much of the molestation can be called homosexual, feminists for years have drawn attention to the fact that rape is as much or more a crime of power as a crime of sex. 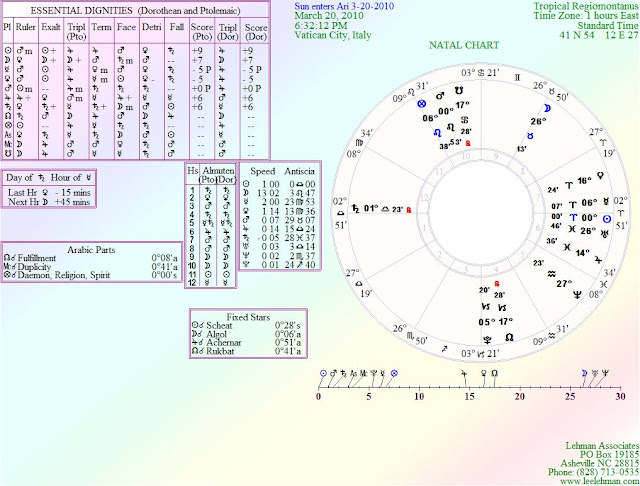 There's so much to see in this chart! The Sun-Saturn opposition straddles the angles, thereby indicating that this is one of the hot spots where the Aries Ingress will have a great effect. This fact alone suggests that, this time, the scandal cannot be swept under the rug. But there are further arguments that confirm this. The Moon is partile conjunct the 9th house cusp. In most charts, we'd hardly read this – but the subject of our inquiry is a Church – a 9th house matter. Normally, we would read Moon in Taurus as wonderful – but this Moon in Taurus is conjunct Algol – the Head of the Medusa. The Medusa – a female chthonic symbol – the old goddesses of fate and fury: the ones that could wreck havoc and were the most feared of the female deities. It would be so easy to simply leave this as a symbol of “beheading” of the Church – a powerful symbol that, before this is over, Benedict must go. But I think both Benedict and the rest of the Church hierarchy have vastly underestimated the rage that these stories of abuse followed by cover-up have generated.
This idea is further supported by the South Node in the 10th – the destruction of the Head of State. In Vatican City, the Pope is the head of State. But with the Sun trine Mars, I have no doubt he will go down fighting. I also don't doubt that he earnestly believes that he has done nothing wrong.
Posted by J. Lee Lehman at 3:48 PM 2 comments: