Mundane astrologers generally have two choices for house placement of lawyers: the 9th, or 2nd. The use of the 2nd is relatively uncommon, but specific: this refers to the old idea that the 2nd house includes your second in a duel. Thinking in the terms of the British legal system, your lawyer is the 9th when she is acting as your solicitor, or legal advisor. A lawyer become the 2nd when she is acting as your barrister - the person defending you in a court of law.

Both of these roles are perfectly legitimate, traditional job descriptions for lawyers. However, as an editorial in the Washington Post pointed out, a lawyer takes an oath to abide by the law. A lawyer is responsible for upholding the law and to interpret it to her client.

Events in Washington, DC have thrown some of these ideas into question - or at least, challenge these assumptions. The trial, conviction and pleas bargain of Michael Cohen puts us in the position of looking for a model for how to evaluate this situation astrologically.

But first, let's be clear. Cohen was convicted of eight counts of bank fraud, tax fraud, and a campaign finance violation. As such, in the chart for his trial, he is the defendant, and he pleaded guilty. My question is: can we characterize the services he performed for Trump as being 2nd or 9th in nature? Perhaps not.

Below is the chart for the beginning of his trial, at which he pleaded guilty. 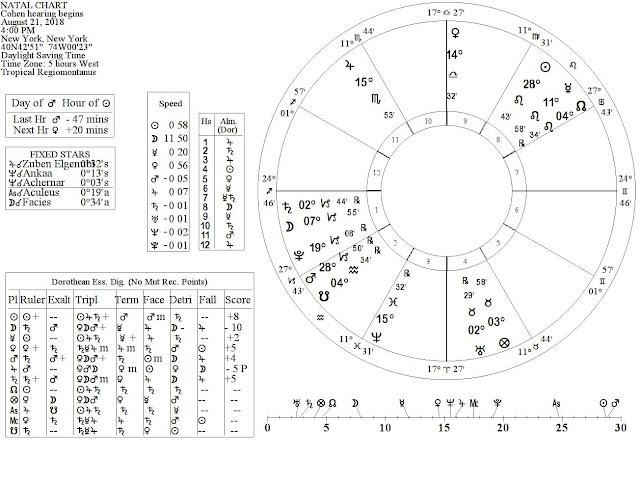 The time for the trial was confirmed by Stephen Brown, of the NY Daily News. I mention this because there were news reports about the announcement of the plea bargain, before the trial ever started. While the rumors were true, they don't mark the moment where the trial became official.

Born 25 August 1966, the trial date fell in his apoklima: the period of a month preceding the solar return, when the new solar return takes effect from the old one. His natal Moon is in Capricorn (perhaps the natal Sun in Virgo and Moon in Capricorn begins to explain his rather morose appearance).

But in examining the chart itself, I was struck by several things. The two parties to this trial, Jupiter and Mercury, will perfect by square. Cohen has placed himself in the hands of his enemies, so to speak: he will now be unable to avoid answering questions, and he will have to cooperate. But the square suggests that this may be anything but easy.

But in terms of symbolism, the chart has one other factor which may be instructive: the Ascendant itself. The sign Sagittarius is already suggestive as one of the signs of Jupiter. Ptolemy gave law makers to Jupiter, but ever since, there's been a debate about whether to assign lawyers to Mercury or to Jupiter. Lilly conveniently gave both. However, Jupiter's placement in the 11th seems highly suggestive to me. The reason being that one of the archaic meanings of the 11th, one which Lilly would certainly have recognized, is the king's man.

The reason that legislatures ended up being 11th house matters was that they started out as vassals of the king. This may not be their current function, but in days gone by nobles became such because they did favors for the king - and then the king rewarded them with lands and other favors.

There was one who became the infamous specimen of the  type: Richard Rich (1496-1567), who was the "fixer" for Henry VIII. Rich appears as the villain in the play about Sir Thomas More, "A Man for All Seasons." The truth seems to match the play. Rich used all means fair and especially foul to solve some of Henry's more difficult problems - for which we was immensely rewarded. So here we have our prototype: the amoral type who accumulates wealth, power, and prestige by doing the dirty jobs for an alpha male.

What seems clear in the story is that Cohen went beyond the job of lawyer in his dealings for Trump. We don't normally have a job description or a house assignment for "fixer." But this chart at least suggests the house rulership.

Lee's STA Medical Practitioner's Course will be in New York City in October.