Once again, speculation is rife, and astrologers are trying to sort through the possibilities for the new pope, just like everyone else. Following so soon after the 2012 USA presidential election cycle, I can't miss noticing some of the same feeding frenzy - and quite possibly, some of the same mistakes made then.

Perhaps the biggest mistake, imho, is the continued attempt to use horary in order to predict the result. I am going to repeat what I said at the time of the election: to get a good horary requires intimate personal involvement in the outcome, and simply being a news junkie is not enough. Then there is the obvious admonition about not asking the same question twice. It is simply inconceivable that all billion or so possible horaries would come to the same conclusion.

We are in the land of mundane, folks, so let's try to understand how to answer these questions using the right tools. And the best place to start is to look at the last papal conclave in 2005.

We actually have reported data for the dramatic moment when the doors to the Sistine Chapel were closed, closing in the cardinal electors. Here is our chart. 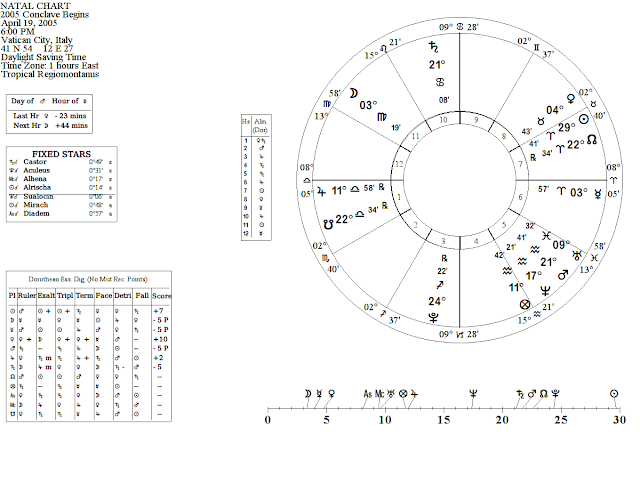 The first thing to notice about this chart is that there is a cardinal sign on the Ascendant. Going back at least as far as Dorotheus, this tells us that this Conclave will take less time than average. The interesting thing about the structure of a Conclave is that the usual format is that the Cardinals go in, and elect one of their own. As an event, it is the cardinal electors given by the 1st house: they are the movers of these events. They are electing the 10th house pope. So in this chart for 2005, we see the cardinals represented by Venus, Ruler of the 1st, dignified in Taurus. The future pope is given by the Moon ruling the 10th. The Moon in Virgo: perhaps a writer, an engineering type, an introvert - all possible renditions. But perhaps the most significant signature is that the Moon is coming to Venus by trine in one degree - and the new pope was elected within a day of the beginning of the conclave. What is perhaps most amazing about this is that Pope John Paul II had updated the papal election procedures, and the newer version has made the living arrangements during the Conclave much more comfortable - something that, it might be argued, could have made it easier for the Conclave to last longer. But it didn't! 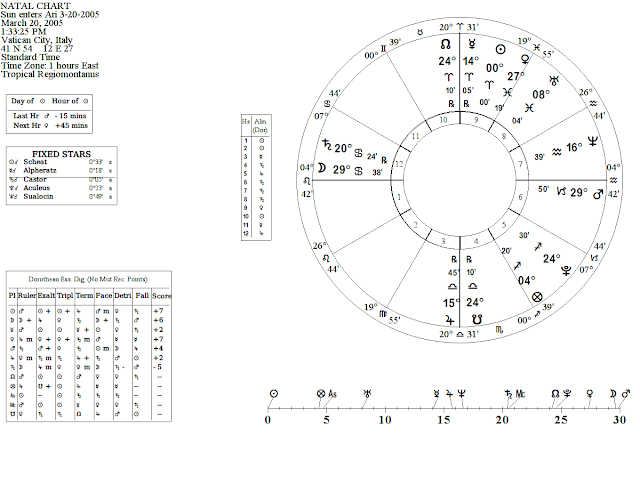 Here we see the Aries Ingress before Benedict's election. The first and perhaps biggest point is that this chart covers both the death of John Paul II and the ascent of Benedict XVI. Here we are immediately struck by the partile Moon-Mars opposition so close to the Ascendant-Descendant. These cusps themselves are the Gates of Life and Death, as originally formulated by the Greek astrologers. The Moon, ever ready to show the action in a chart is opposite Mars, Ruler of the 10th. What is so fascinating about this is that Joseph Ratzinger was of the nature of Mars: a true defender of the faith. John Paul II was noted for his involvement with the Marian aspects of Chrsitian faith, surely more lunar in nature.

Both the Moon and Mars are highly dignified here with Mars having both exaltation and Triplicity. But they are at the 29th degree: the old order is changing in this moment, and the new pope being elected is very much of the old order.

Mars' rulership of the MC, and just having set below the horizon guarantees that this papacy will be marked by struggles relating to past issues, and that thes struggles can have the effect of diminishing the Church. 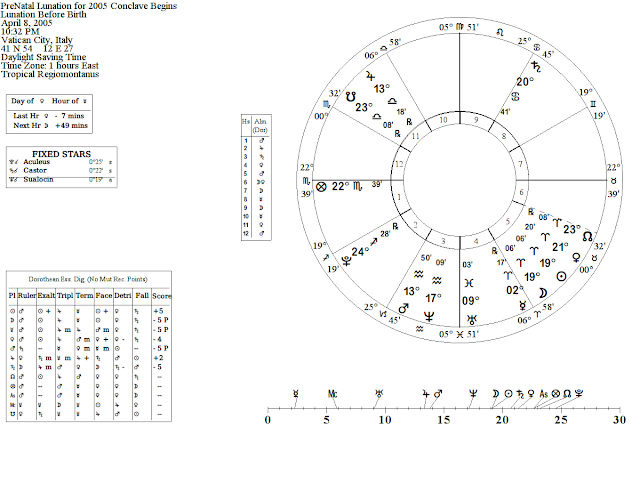 Consider next the lunation before the 2005 Conclave. Here we see the signature of what was perhaps the biggest problem of Benedict's reign: the seemingly unending litany of sexual scandals. How can we be surprised with the New Moon in Aries in the 5th house of sex, conjunct Venus in Detriment, and with the North Node there to blow up the circumstances? Here we see the new Pope, Mercury as in the Conclave chart, in Aries - his tongue was sharp enough when he spoke of the problems, but he looks completely ineffectual in this chart.

We might also contemplate Pluto in the 2nd house with a retrograde Ruler Jupiter in partile trine to Neptune to represent the banking scandal. 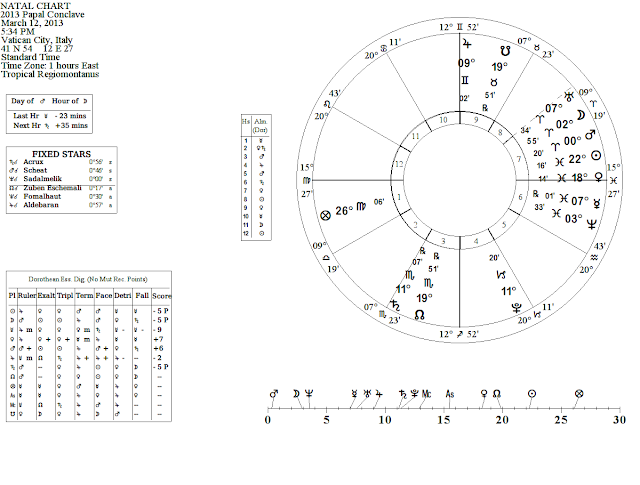 But enough of the past, what does the current Conclave chart say? [The following is a change to the original text posted last night.] The cardinals filed into the Sistine Chapel with Mercury still angular, but ruling the Ascendant and MC, and Jupiter in the 10th. As they completed their chanting, oaths, and other preliminaries, both Neptune and Mercury, set, and Jupiter moved from the 10th to the 9th. Jupiter in the 9th is appropriate for an ecclesiastical event: and I have to say it is more descriptive that a private meeting have so much more of a cadent look. Jupiter is still angular, though, being still conjunct the MC. Some ancient sources have distinguished between the 3rd-9th axis and the 6th-12th axis, finding the 6th-12th to be much more malefic - which makes sense under normal conditions, but so much more so for a religious occasion.

I took the closing of the doors at 5:34 pm Vatican time. This Conclave will be of average length, the general meaning of mutable angles. There's a very strong Mercury signature, with Mercury ruling both 1st and 10th. And poor Mercury! In Detriment, in Fall, cadent, and retrograde. The importance of Mercury at this time cannot be overemphasized! I have to wonder whether this chart would grant a pope even remotely able to tackle the very serious issues facing the Church. Neptune can represent great faith: but also great blindness. As the procession was occurring the Daily Telegraph reported on the arrest of a Colombian priest in California for child battery, showing all too clearly the problems of the Church today.

The Jupiter dispositorship suggests that the new Pope will surely be a man of great faith and conviction, because that is what Jupiter represents. But Jupiter is in Gemini - its own Detriment - so again, I would worry that this man will not be entirely up to the task.

I would also not be surprised to see this Conclave run until Mercury stations direct, given the strong Mercury rulership shown. Retrograde Mercury is applying to Neptune: but in the moment of turning direct, it refrains from conjoining Neptune, which itself is perhaps the biggest hopeful sign we can muster.