The Middle of Pluto in Capricorn

In Astrology of Sustainability, I discussed the orbital resonance between Neptune and Pluto. The two of them have a 3:2 orbital resonance, The Jet Propulsion Laboratory gives the orbital period of Neptune as 164.79132 years. They give the orbital  period of  Pluto as 247.92065 years. So: multiply the Neptune  period by 3, and you get  494.37396 years. Multiply the Pluto period by 2 and you get 495.8413 years. Almost identical. What this means is that, roughly every 500 years, you get the same positions og Neptune and Pluto by sign and approximate degree, and at the "midpoint" of just less than 250 years, Neptune is in the opposite sign, while Pluto is in the same sign. In 1522, Pluto and Neptune were in the same positions as they again occupied in 2015. In 1768, Pluto was in Capricorn, and Neptune was in Pisces. This is shown in the graphic below, from my book. 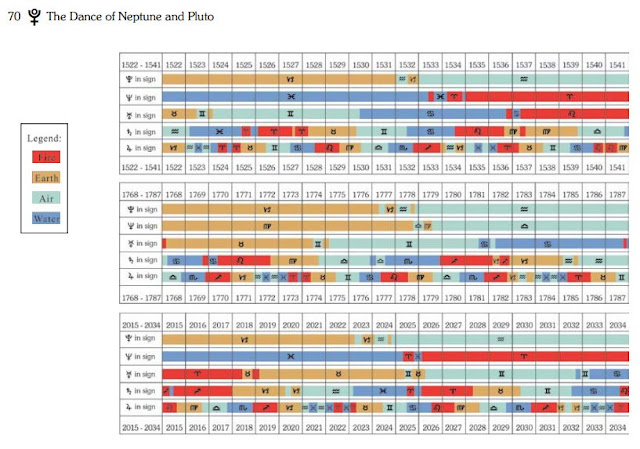 This diagram is copyright J. Lee Lehman and may not be reproduced without permission.


When you talk about processes that last 500 years, you are way over the top of what an individual human being can experience: these can mark human cycles, but only on a collective basis. There were two outstanding events for 1522. Suleiman the Magnificent, the Caliph of his day, scored a major victory at Rhodes over the European Christians, in one of the remnant mop-ups from the Crusades. And secondly, Martin Luther's translation of the Bible into German was published, a year after he was excommunicated by the Pope.

In trying to grasp societal changes on this time scale, the obvious question is, what themes are we seeing now that correspond to those then? There is still a clash going on between Christians and Muslims, sad to say. That one is very clear and requires no translation at all. However, are we to see the rise of Protestantism in the 16th century as a purely religious phenomenon - such that we should be looking for a new schismatic now? I think perhaps not. In 1522, the Catholic Church was easily the largest, richest institution of the time. Viewed on this more secular basis, the struggle that Luther pushed forward broke up the wealth of the Church, not merely its salvation monopoly. The Church truly was the Plutocrat of the time. Pluto has now reached the halfway point of its time in Capricorn - just as it had for Luther's rebellion. What was clear at the time were such measures of greed as indulgences, and the selling of Church offices.

If this interpretation is correct, then this little history lesson also reminds us of how long a power shift takes to accomplish.No one US presidential election will determine this, and, along the same line as the Catholic Church as being a universal church, it cannot be accomplished in one country alone. Are we to then consider that, with the passage of Pluto in Capricorn, wealth has become as concentrated in one monopoly - church or oligarchs - as it will be, and then the fissures appear? We shall see.