A Demonstration of Decumbiture: Carrie Fisher 1956-2016

The viewing of a life through the death is, to put it mildly, an odd way to operate. Astrologers often engage in ambulance chasing, and yet the ironic piece is that most astrologers get very nervous about the prediction of death within their own practice. Does fame somehow make this acceptable?

I would propose an alternative.  In Traditional Medical Astrology and other references, I have denied the absolute possibility of fixing the time of death in a particular life because there are more factors at work than astrological necessity. The ability of your mother to have access to good prenatal care is probably a bigger factor for you in the first few years of your life than the condition of your Hyleg. The efficacy of antibiotics and the availability of clean water is probably more important before the age of fourteen than the position of your Alchocoden. But, even though that may be true, astrology can identify periods of “death weather” – times when the being’s life comes into proximity with the veil, and when the outcome is open to discussion.

A further consideration is worth some thought, and even if you accept the possibility of free will, we can all be seen as being caught in the Norse god Wotan’s dilemma.  Wotan, or Odin, had a magic spear, but this spear was where he recorded all of his oaths. The problem was, eventually he would swear oaths that would conflict. Those oaths could destroy him. This is our dilemma, too. Each decision that we make opens doors, and closes doors, and as we grow older, our options diminish, because we carry all the ramifications of these past decisions. We can see this process metaphorically, biologically, or astrologically.

On a general astrological clock, we can examine Carrie Fisher’s solar return for 2016 and see Mercury, ruler of the Ascendant of her solar return at her birth location opposite Uranus – showing the possibility of sudden events that could be dangerous to her vitality, further argued by the fact that Uranus was in the 8th house. Mercury was combust in the superior conjunction – the direct one. The combustion itself can be seen as a death and rebirth experience. Mercury natally ruled her 6th house of illness and 8th house of death. Mars ruled her solar return 8th – and Mars was conjunct Pluto, with the Moon coming to oppose the conjunction. There is surely enough to say that 2016-2017 was an exit visa for her: a year where death was a possible outcome, and where if it would happen, it was through a sudden event. This general reading was confirmed by looking at the solar return of Carrie’s mother, Debbie Reynolds. Mercury, ruling the 5th (daughter) is conjunct Uranus, and the 8th from the 5th has a Moon-Pluto conjunction in it, with the Moon partile square Mercury, ruler of both 5th and 8th. This is a very specific reading for the potential death of a child in this solar year.

What could you (or I, or anyone) have said? This could be a difficult year, don’t stress, etc. Would taking a polar flight of 11+ hours in length constitute a stress? My friends who are former flight attendants say yes, but would the average person agree?

Once the heart attack commenced, we the public got next to no information, other than the confirmation that she did in fact have a cardiac event, that she was taken to the hospital, and that her condition had been “stabilized.” There was one time which was shared: the time that emergency services on the ground in Los Angeles was informed that an ambulance would be necessary: 12:15 pm Friday afternoon, 23 December 2016.

From an astrological perspective, this can count as a decumbiture, although not the preferred one. The best decumbiture, which is the event of an illness, would have been for the time that she experienced the attack in the first place. In the coming weeks, we may discover this time, because doubtless, the airline personnel recorded this in the flight log. However, hospital admissions are recognized decumbiture events, and we could consider the request for an ambulance as at least an extension of that concept. 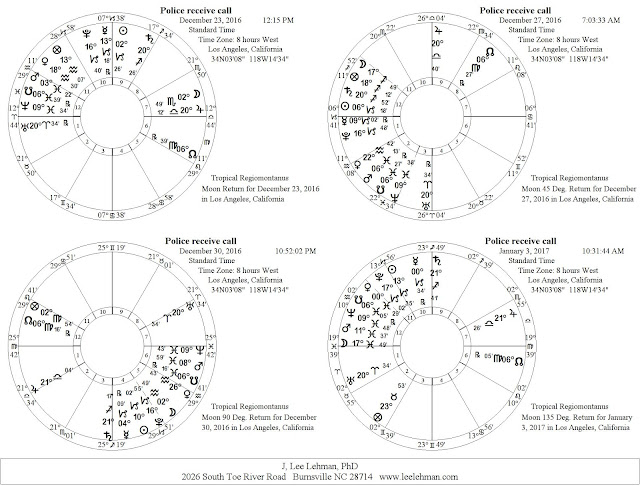 As a decumbiture, it’s pretty grim. Mars has taken over the chart. Mars rules both 1st and 8th houses, as well as disposing the Moon. The Sun, which rules the heart, is ruler of the 6th and conjunct the 10th – this was a very public heart attack.  The Sun is coming to the sextile of Mars, since the Sun is the faster body. Mars itself has minor dignity by out-of-sect Triplicity, unless you prefer Lilly’s Triplicity table, in which case it is the sole Triplicity ruler. As a minor dignity, we can hope, but it’s not as strong as we would like. The malefic quality of Mars comes through too easily. Mars is in the 12th, applying to the South Node and Neptune – not exactly the dynamic duo that would spell life. Of the two of them, I judge the South Node the more dangerous: I have seen it as a point of destruction in other deaths.

But decumbitures have a second function: they are the basis for Hippocrates’ doctrine of the critical days. This doctrine, which actually predates the use of Hellenistic horoscopic astrology, observes that diseases undergo crises at the points that we would now define as the 8th harmonic lunar returns. At these points, the patient can improve, get worse – or die. And sometimes if they are boring enough, there’s no change.

The four-chart graphic shows the decumbiture event in the upper left, and then the first three critical days. The first one occurred less than two hours before she died, and you can clearly see why I posted the comment on Twitter: “Best wishes #CarrieFisher! Her critical day on Tuesday morning is rough, but things improve after.” This statement also illustrates how I work with people when death is the probable (or a strong possible) outcome: I try to identify a point after which the primary danger has passed. Like breaking a board in martial arts, if you can visualize your fist on the other side of the board, then you have gone past your target and succeeded.

For December 27th, there are a whole series of arguments of death in the decumbiture which have become exact:


This, then, is the moment – and it was. She died at 8:55 am. If she had survived, the next critical day chart shows Mars applying to Neptune. While not as severe in scope, this suggests that she would have been unconscious. The prominence of the 12th house in the third critical day, and the Moon’s application to the square of Saturn shows she would still not have been better. She might have been “stable,” but the stability of intensive care can either be a life saver, or an eerie in between state.

So once we get past the shock, and this analysis, perhaps we will be able to get back to the essence of the woman who we are missing so much now. Journey well, Carrie. It is your life that enriched us.

I have been an astrologer for 35 years. Your delineation of Carrie Fisher's Charts are masterfully done! Searching the internet, myself, for birth data, I came upon this. My first astrology teacher was a student/discipline she called herself of Evangeline Adams. I aspire to be that accurate. I believe you have reached that goal. Ms.Adams was very open about the more taboo subjects with all of her clients, whether they liked it or not. Death is a gateway that we all pass through, and she discussed it freely with her clients. In fact, many wanted to know and when traveling this was a frequently asked question. Trips were planned upon Ms. Adams. astrological reports. Bravo to you!!