Imagine, if you will, that we have made it past November without half of the US population annihilating the other half. Imagine that we have elected a president. If the current poll figures hold up, that will be Hillary. I haven't done my own presidential forecast yet (required by the ISAR conference!) because, like many Americans, I am so ambivalent about this election that it is almost depressing.

Ok, so hang with me here. I am not yet (or possibly not) predicting Hillary will win, just sayin...

What would we have, come 20 January 2017? A president with 2 disputed birthtimes, our first uncertain president astrologically since Ronald Reagan. In an earlier blog post, I pointed out that, using Bill Clinton's undisputed data, that he may be having some health problems this year. Hillary's attention is showing as possibly directed toward matters other than the work at hand.

But we now have one other chart in paly: Tim Kaines', which is A data. This gives us an additional portal into the next few years. His nativity is shown below. 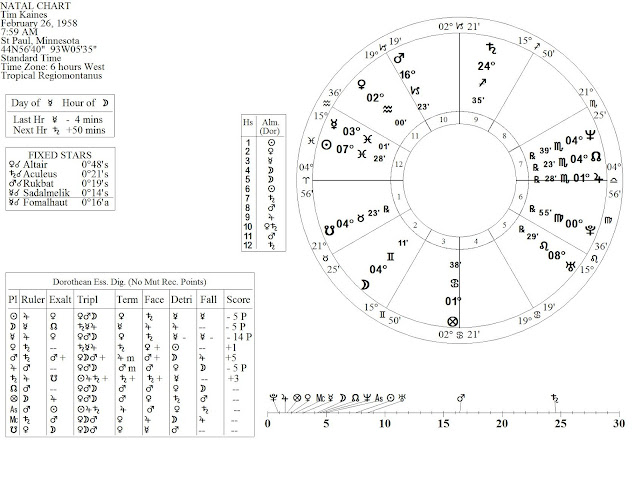 It has been said by many that the chart of the president shows the manifestation of the people's will at the time of the election, and so we should not so much look for a presidential signature, than for what makes sense for the nation at the time. We assume that the chart of the vice president does not need to be a match in the same sense that the president should. Looking at Tim Kaine's chart, what is his primary strength that he brings to this ticket, and potentially beyond? The answer has to be exalted Mars in the 10th house. Mars is the most elevated planet, going toward the MC by diurnal motion, while Saturn declines.We have a chart where it is the malefics which have dignity, not the benefics,  We get the sense that there is a bit of the school of hard knocks here: that he isn't handed that much, but that he creates opportunities.

Observe the degree line at the lower right of the figure. Normally, it is my horary training that makes me look at a degree line at all, but in this nativity, it is extraordinary. Those same two malefics stand out on the degree line: everything else is clustered in the lower degrees. The Sun-Mercury in the 12th in a nocturnal sign suggests a bit of an introvert, not the person you pick out for his innate prominence. But exalted Mars in the 10th: he prospers through being an excellent worker bee. He excels at what he does. Give him a job and you shall know him by his works. The three important jobs he has had going into this election are: Governor of Virginia, Chairman of the Democratic National Convention, and currently, Senator from Virginia.

But to understand what is going on, we need to put the chart in motion. The next figure shows his solar returns, starting in 2016. 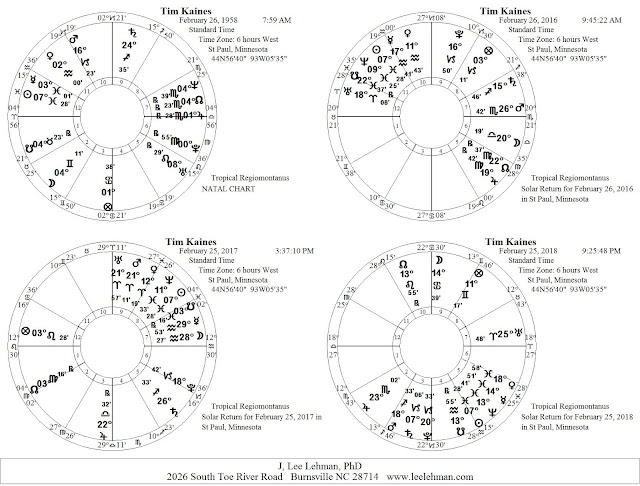 At first, looking at his 2016 solar return, you would almost be tempted to say: so what? Sun conjunct Neptune might make you think he was going to disappear for the year: but remember that he has Sun trine Neptune natally, so this is a resonance with his nativity, and thus a potential advantage. But two other things stand out. Venus rules the Ascendant in the sign of Aquarius: normally ho-hum peregrine, but here, Venus in Aquarius is his natal placement, and thus strong - and especially so in the 10th. We have the natal pattern of Ascendant ruler in the 10th recreated. But now secondly, Mars, his natal Ascendant ruler, is once again very strong by dignity, and ruling the 7th and in the 7th: an angular placement bearing upon competition and war. The chart is thus not as weak as it seems at first. He's not #1 on the ticket, but he does show some prominence this year, And then, Pluto is transiting his prominent natal Mars.

But if his 2016 shows prominence, consider his extraordinary 2017 solar return, which takes effect just a month after the inauguration. The Sun itself is in the 8th house of death, continuing its multi-year conjunction with Neptune.  But here we have a partile conjunction of Mars and Uranus, just past the 10th house cusp. The 10th house cusp is 29 degrees Aries if his time is accurate, and here we have an indication of a sudden potentially violent event affecting a 10th house person in his life, who looks transitional anyway with the 29 degrees on the cusp, just as he is in the midst of his second Saturn return. The Sun ruling the Ascendant from the 8th is already showing the death theme for the year.

The 2018 solar return shows a very dignified Moon ruling the 10th, but besieged between Saturn and Pluto, showing intrigue and difficulty - and a degree of weakness, with the Moon in the house opposite her joy, and Saturn dignified, but cadent. If he is to have a more prominent year in 2018, it will not be easy.

I leave the reader to draw his or her own conclusions: I know I have!

For more information about this upcoming horary event, click here!