Since Kepler College hosted an inaugural party, I thought I would expand on a few of the remarks I made there that might be useful to astrologers examining the inauguration chart.

The U.S. Constitution spells out clearly that the term of the president begins at noon on 20 January now; 4 March for presidents inaugurated before 1937. However, the Constitution also specifies that the President and Vice President shall take an oath of office. How do we interpret this? The presumed answer is that the oath must be taken, but the term starts at noon. We have just seen a delightful bit of Mercury retrograde as Chief Justice Roberts came over to the White House on January 21st to re-administer the oath, as he had flubbed its administration during the inaugural ceremony. There was precedent for this: when Coolidge became president, his father, a notary public, administered the oath of office at 2:47 am 3 August 1923, Plymouth, Vermont. The oath was re-administered when he arrived in Washington by a district judge - because nobody had any idea whether a state notary had the right to administer the oath. Notice that the concern was over the legality of the oath - not over whether he was president. In the same fashion, President Obama had formally submitted the nominations for his cabinet and other senior officials, and signed several other papers - there seemed to be no concern that he reissue these, or that his cabinet members who had been sworn in themselves be re-sworn. With Justice Roberts clearly being involved in these procedures, one has to believe that if he thought that President Obama had not really been president for a day and a half, he would have suggested that all these bits of business be repeated. The oath must be performed - but the oath does not start the presidency.

So this is our first hint. Astrologers for decades have gathered around to get the precise moment of the oath: but it doesn't matter. Coolidge was president upon the death of Harding. Johnson was president when Kennedy was declared dead. There is no time when there is no president. So either noon is the time, or the death time of a sitting president.

But what do these charts show? The theory is that they show something about the presidency. Let's go back a couple and see how they work - and some of the things that you can and cannot do with them.

There are some things about inauguration charts that can and cannot be used. Consider -
What this leaves to interpret is actually a very great deal. Since the inauguration is about the president, the ruler of the 10th house - Saturn - is of paramount importance.

For Bush's first inauguration, the most notable feature is Mars in Scorpio so close to the 7th house of open enemies. I had interpreted this chart as it was unfolding at a Kepler College symposium - and what had struck me at the time was how this made it so obviously a war chart - which made no sense at that time, because we weren't at war with anybody! Well - that is a lesson in calling it like you see it!

Saturn actually was dignified by Term and Face - minor dignities perhaps (although in Medieval style delineation term is not considered minor) - but it was also rendered imbecilic by being retrograde. What can I say? But that Saturn was rendered: the sextile from disposing Venus in exaltation meant that Bush was really quite strong - but because of the influence of others, since it was the rendering that saved him. Saturn was pretty close to the fixed Star Algol, a definite malefic. Besides the tendency to lose one's head, it represents someone who is headstrong, and incapable of listening to others, or caring what others thought. He was going to do what he was going to do - and at first, with Saturn in the 1st, he received public support. But the conjunction to Algol really throws in a question about the tendency toward "the ends justify the means." 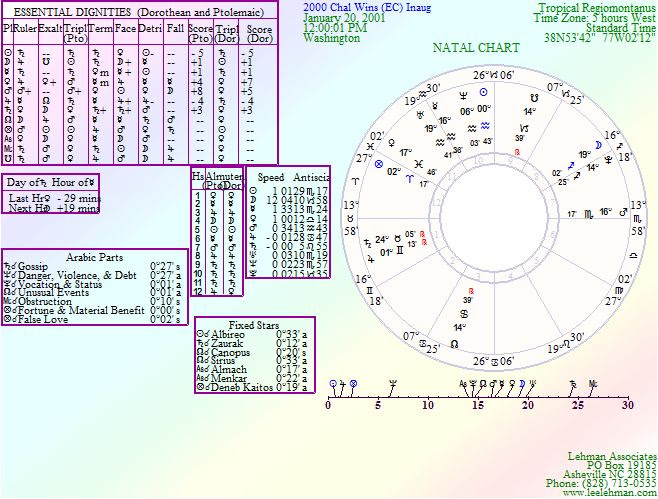 For some time, I've had some questions about the extent to which second inaugural charts work - but the 2005 one convinced me. 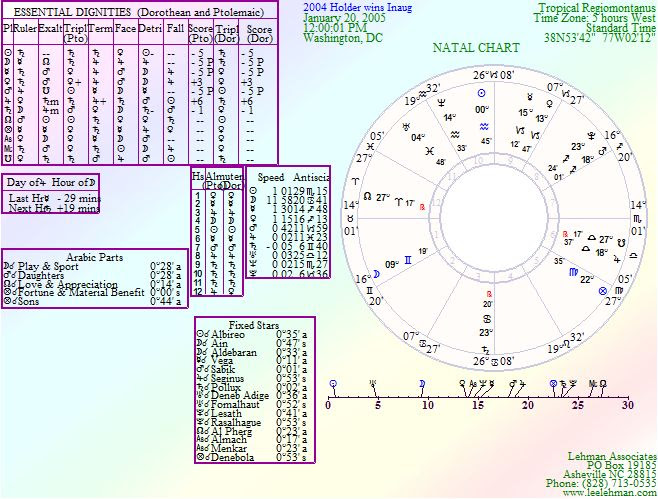 Here, Saturn ruling the MC, the president, at the Nadir and at the Bendings in its detriment and retrograde - with nothing this time to render the imbecility. Now, a word about the placement of Saturn at the IC. While the concept of "Bush at the Nadir" has a certain poetic expression to it, there's an idea in classical mundane that you can read when during the time that a mundane chart rules by examining where the principle placement is by quadrant in this chart. Since it's Saturn we're concerned about here, that placement puts the full force of its wretchedness in the last year of his term, because this counting system starts with the quadrant from the Ascendant to the MC and runs diurnally.

So what of the Inauguration 2009? The first problem with this chart is that the Moon is at 29 degrees of Scorpio, void of course. A lot of modern astrologers take void to mean "nothing will come of the matter," but that's not entirely accurate. It's perhaps more accurate to say that the trains has left the station and it is now going to follow the tracks where they lead. 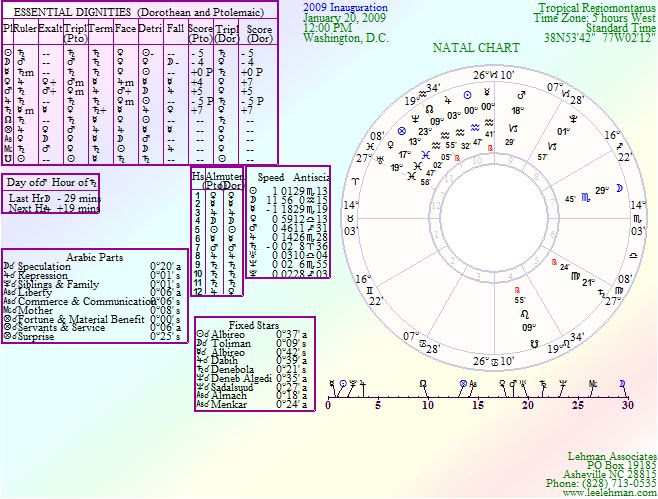 The emphasis in this chart is: Obama has been dealt a set of cards, and now what he can accomplish is already determined by the hand he has. He can play well or play poorly, but he is much more restricted than Bush was.

There is a lot of dignity in this chart - so all is not lost. The most dignified planets are Mars and Venus. Venus rules the people (the 1st House), while Mars rules open enemies (the 7th). With the Moon in the 7th, one has to conclude that his stated intention of getting out of Iraq and coming to a new entente with the Islamic world is of primary importance - and there, the late degree of the Moon makes a lot of sense relating to his intentions.

The economy is going to be very problematic: with Mercury and Jupiter, both dignified by Triplicity in Aquarius, but both combust and Mercury retrograde - there are definitely going to be some fits and starts. What is most interesting is that combust denotes secrecy in the old texts: so it looks like President Obama's goal of openness is going to be seriuosly resisted in that respect. But with this amount of Triplicity, there just may well be some dumb luck that helps out.

There is physical danger to the President - Saturn is in the 5th, and the 5th is the 8th from the 10th. But Saturn does have some dignity by Term, and Sahl, along with other Medieval sources would state that since Saturn is cold and dry and in a cold and dry sign, that there is some strength there.
Posted by J. Lee Lehman at 7:56 AM No comments: