Astrologers have many tools for examining the outcome of elections, but many astrologers find it difficult to get past some sort of comparison of the nativities of the candidates.  Unfortunately, this year's US presidential race is awash with candidates where the birthtime is murky. Thus, we find ourselves more dependent on mundane methods.

It is a sure bet that a number of astrologers will attempt to use horary, but it's really not the right tool - except, perhaps, for the people most directly involved with the campaigns. The rest of us are just not personally involved enough (although partisanship makes it feel otherwise) to have standing to ask the question.

I have written on presidential elections previously (Click here for a blog entry from 2012) - but this time, I decided to run an experiment. In order to run, all candidates have to announce that they are running, and form their apparatus. This time, I collected the data for those declarations, to see whether they are predictive, at least to the stage of successful nomination by a political party.

Here I present two: that of Hillary Clinton, and the one for Bernie Sanders. What is especially interesting with this pair is that when they declared, Bernie was considered a complete long shot: the odds of him even being a serious enough candidate to make Hillary break out into a mild sweat were considered outrageous. At the moment, we have close to a dead heat, at least in the first two primaries. Do these declaration charts reflect this? 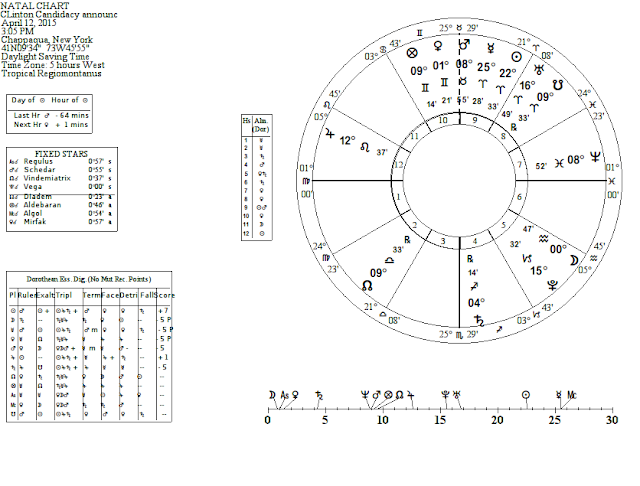 So we start with the fact that this election was supposed to be a cakewalk. Does the chart reflect this? As the initiator of this event, Hillary is the 1st house, and her opponents are the 7th. The "prize" is the 10th house, and in Hillary's case, at least in the Democratic Party nominating process, the 4th is the "castle" of a castle besiegement model. The relevancy here is that castle besiegement in an election would be most appropriate in a case where there's a huge discrepancy between the relative strength of the candidates. Hillary had amassed a significant financial advantage, and she had the support of the mainstream party apparatus, with significant posts held by former campaign staffers of hers. In other words, the playing field was not level. We shall have to consider all these factors in our judgment.

Mercury, ruling Clinton, is peregrine, cadent, and combust. Already, this is a surprise! She does not look at all strong in this chart. In past work with games prediction, I have discussed the fact that Mercury and Jupiter as a fighting pair is not as consistently competitive as other combinations. Perhaps we are seeing here a marker for how the Democratic race has not been as vicious as the Republican one - but we may also be looking at a certain absence of resolve: as if, assembling all the pieces in advance was enough, and then you just say your lines, and wait to be nominated. If this truly was what she was thinking, then the presence of Saturn in the castle (the 4th) immediately challenges this assumption. Saturn in the 4th is a bad thing for the castleholder. Those advantages become an albatross, instead of operating as an advantage.

Next, we consider Neptune in the 7th, and the ruler of the 7th in the 12th. Remember: this is her opponents from her point of view. With the ruler of the 7th in the 12th, she can't "see" them for what they are: and there is a danger of self undoing, or a secret enemy issue. Combined with the fogginess of Neptune in the 7th, she cannot see her opponents clearly, and as a result, they are more dangerous. Ruled by a Jupiter in Leo, with out-of-sect Triplicity, they have some strength: and specifically some luck. This does not look like a cakewalk.

The Moon cannot help her here. Peregrine in Aquarius, its immediate aspect is a trine to Venus in the 10th. Ok, obvious interpretation: she is counting on women to bring her over the top, because a lot of women (presumably) would like to see the first woman president. But both the Moon and Venus are peregrine, so this strategy doesn't look as compelling as the analysts assumed. The voters would be ruled by the Moon, and, with the Moon in Saturn's sign, do we have the signature for her comparative popularity with older voters?

There are also two fixed stars which seem important. The big one is Algol conjunct the MC. Now, here is the prize, and here is the Head of the Medusa, a terrible image for success in this case. The second one isn't nearly so poignant, but the North Node was conjunct Vindemiatrix, the widow's star, which Diana K. Rosenberg described as a woman alone. That symbolism is also completely counter to the idea of a successful candidate surrounded by aides, admirers, and staff. 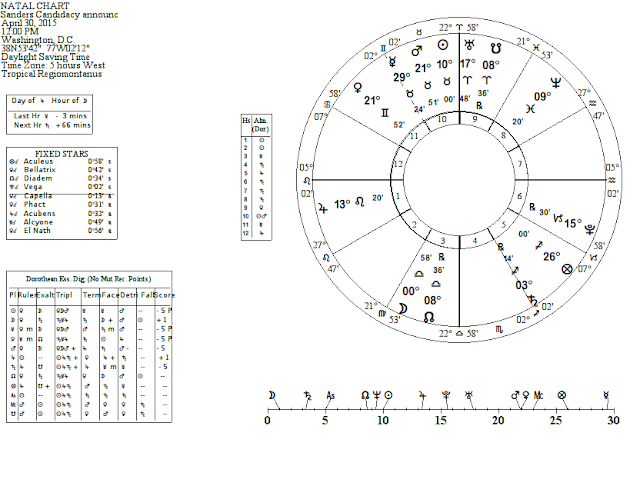 This was the season for announcements, and Sanders' was only a few weeks after Clinton's. The ingress of the Sun into Taurus represents a step down in dignity from the Sun in Aries: but is it really? In Hillary's chart, the Sun only ruled the 12th house, so it was more a favor to her enemies than anyone else. In Bernie's, it rules the Ascendant, and it's angular in the 10th. This is actually one of the biggest contrasts between the charts: Bernie's has angularity he can use, whereas Hillary's has what we might call the wrong kind of angularity: associated with the 7th, and a nasty opposition between 10th and 4th. All that Taurus associated with the 10th house in Bernie's suggests that hard work may pay off. The Sun applies by square to 1st house benefic Jupiter, dignified by out-of-sect Triplicity. Now that's not perfect, but the squares to the benefics are generally much easier than the oppositions to malefics.

Mars is both in and ruling the 10th - a very powerful statement. Both charts have Mars in Taurus, but Mars is more central to Bernie's announcement. At first, one might be rather put off by Mars in its Detriment, but in contest charts, the malefics in debility are actually to be preferred. In any case, it's one of the hardest working Mars position, and one of its principle qualities is perseverance. Mars in Taurus is effectively in overdrive, taking all the time it needs to do its job, and being relentless about doing things its own way.

Bernie doesn't rate the castle considerations, because he doesn't have the institutional advantage. Here it may be telling that a peregrine Venus rules the 4th - perhaps a description of the circumstances surrounding Hillary.

In both cases, the Moon is at zero degrees - with a lot of room for change. On the one hand, the trine between them at least gives the possibility of one eventually supporting the other. On the other hand, there is lots flux that is intrinsic to the charts. That fact alone argued strongly against Hillary simply maintaining her lead from start to finish. In Hillary's case, change could only be down. A zero degree Moon simply is incompatible with what was expected to be a gentle tune-up for the general election. In Bernie's case, change could initially only be up, but with the two now in a dead heat, change could now go either way for either one of them.

In sum, Sanders's candidacy chart is the better chart. The question is: is it enough to overcome Hillary's astounding initial advantages?