The reason that I don't often make predictions about post-season baseball is that I'm too passionate about it. Strong emotions interfere with good predictions. Which is why most astrologers find themselves to be somewhat flummoxed with their own charts. The other area where strong emotion frequently gets in the way is politics: where almost everybody seems to have an opinion as strong or stronger than the most rabid sports fan pulling for his/her favorite team.

And so again: it's election season.

Well over a decade ago, I worked with Bernadette Brady to build a quantitative model for doing sports prediction based on the Medieval astrologer Guido Bonatti's rules of warfare. With this model, we were able to beat bookmaker's odds for both the cricket matches known as the Ashes (in Bernadette's case) and US football Superbowls in mine.

Shortly thereafter, I asked whether these models could be similarly applied to presidential elections. I did a study not only to determine if the warfare model in general worked (it did), but also which chart to use for the presidential election, as so many mundane possibilities existed. The three charts which historically produced the best results were:

Note: this article can be found at my web site under http://www.leelehman.com/downloads___references.html

Although this model was developed specifically for presidential elections, I have experimented in the past with applying it to presidential off-year elections. In this case, my hypothesis is that the same model that predicts the presidential result by party could predict whether the congressional elections show a net gain or loss for the party in power.

Therefore, in the spirit of this hypothesis, I present the predictions for 2006.

Here are the tabulations according to this model for the three different charts. Please click on any of the graphics to see a larger view. 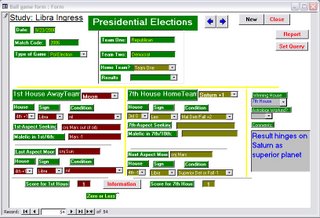 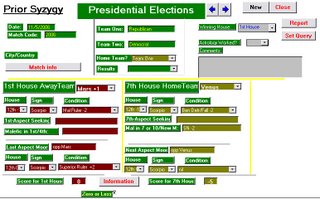 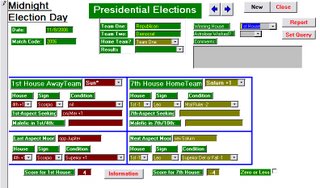 The only chart here which may be unclear is the Libra Ingress, since the score is tied. The rule for tie-breaking is that the superior planet “wins;” thus all three models favor the Democrats. The conclusion is that the Democrats will gain seats: how much is not a function of the model.