I am indebted to Kyle Pierce, for pointing out an error in the computation of the 2020 series of Mars-Saturn conjunctions. This error has been corrected, and information about the charts of Spain has been inserted, since their high death toll came up just after this article was written.


The astrology world was pretty unanimous in declaring that 2020 looked like a challenging year. But as we are all pausing to reflect on just how to think about the rest of 2020, I'd like to illustrate one component of that puzzle. Consider the superior planet conjunctions, specifically here the Mars-Saturn one.

In the classical period, the only conjunctions delineated were the Jupiter-Saturn, Mars-Jupiter, and Mars-Saturn. Later, there would be more possibilities, as additional outer planets were discovered. Of the three, the Jupiter-Saturn commanded almost all the attention. The twenty year duration of this cycle represented a significant period of time within an individual's lifetime, a lifespan that often only extended for only one or two of these conjunctions. But beyond the twenty year beat, the longer cycle of mutations - where the conjunction repeated in the same element for longer periods of time before the entire sequence of four elements would repeat - gave still longer periods of historical time which were long enough to encompass whole dynasties, religions, and longer term patterns.

There was, however, one work specifically on the two shorter Mars series with Jupiter and Saturn written by the 17th century astrologer Richard Edlyn.(Edlyn, Richard. Observationes Astrologicae, or, An Astrological Discourse of the Effects of a Notable Conjunction of Saturn and Mars by Richard Edlyn ... London: Printed by J.W. for B. Billingsley, and O. Blagrave..., 1668.) That said, there are references to its use scattered through mundane discussions at least back to al-Qabisi (Burnett, Charles, Keiji Yamamoto and Michio Yano. Al-Qabisi (Alcabitious): The Introduction to Astrology. London: Warburg Institute, 2004, p. 109.)


The Mars-Saturn cycle was a roughly two year cycle which allowed the determination of which malefic would be dominant for that period. To be simplistic: would a period be marked by fires and fevers, or by famine and pestilence? However, this short period was also seen as part of a larger pattern of Mars-Saturn conjunctions which was a thirty year pattern beginning with the conjunction in Cancer, according to al-Qabisi. Our current Mars-Saturn series by this reckoning began in 2004. We will examine that conjunction in three different locations in order to see whether or how this cycle initiation chart impacts later conjunctions in the series. 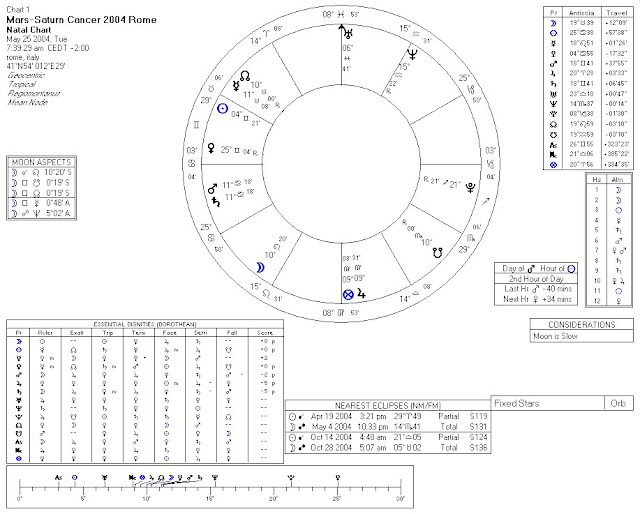 This chart set for Rome, Italy is actually quite stunning for what is going on now with covid-19. The conjunction itself is at 11 Cancer in the 1st house: its angularity means that the effect will be visible to all. Mars rules the 6th house of illness: it is teamed with Saturn, the ruler of death. With Uranus at the MC one suspects a sudden cause. Jupiter in Detriment, which is the second ruler of the 6th, is partile conjunct the Part of Fortune at the IC, which among other things, rules the grave. If this is not enough argument of an Italian effect, the Sun for the 1871 Italy kingdom chart is at 10 Cancer, one degree away.


But now let's consider this 2004 cycle beginning in Wuhan. 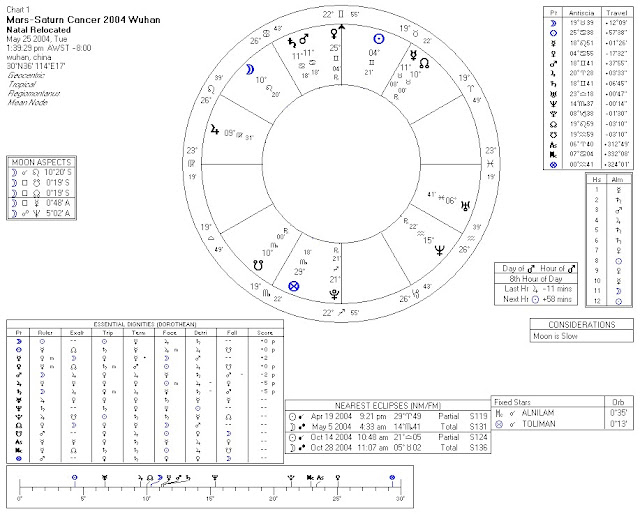 Notice: exactly the same planetary degrees: we are looking at the same chart, but in a different location. Now the conjunction is again in an angular house, with Saturn now the ruler of the 6th (disease), and Mars the ruler of the 8th (death), and Pluto conjunct the IC. Uranus in the 6th could represent the sudden appearance of the illness in this location 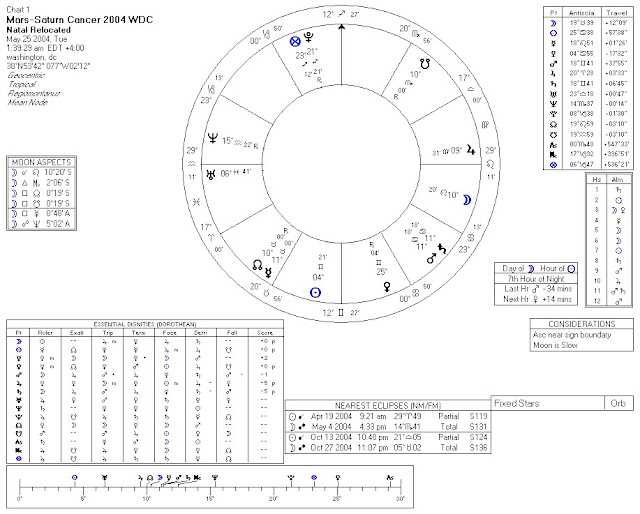 Here the Mars-Saturn conjunction is succedent, so not as dramatic as the other charts. And remember: we are talking about a thirty year cycle.  Mars rules the 2nd, and between 2008 and 2020, the effect seems clear enough. Apparently, the effect shown is primarily financial, although we would wonder what Mars-Saturn is doing in the 5th house.

Obviously, there's way more to these charts than the present pandemic, but for the most part, we will ignore these other indicators. So if these charts are the beginning of the cycle, we can now skip forward to 2020, with the Mars-Saturn conjunction in Aquarius for 2020. 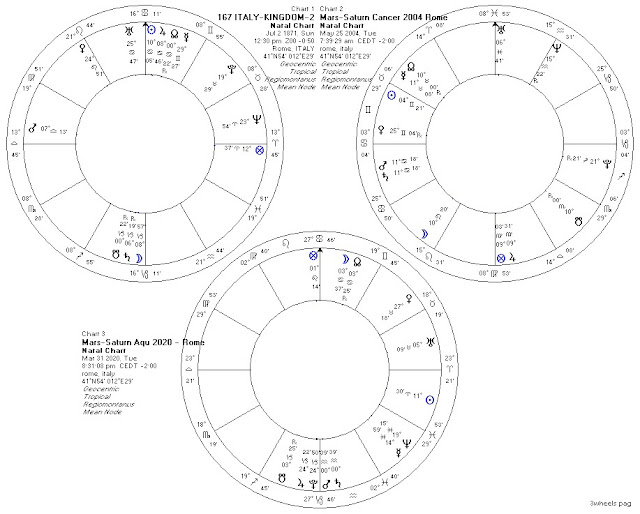 The 2004 Mars-Saturn conjunction in the 1st house identified Italy as a probable site of whatever trends this cycle represents. But in 2020, we see the Mars-Saturn conjunction at the 4th house cusp, which includes the image of the grave, balanced at the IC by the closely approaching Jupiter-Pluto. This combination is completely explosive. Venus, the chart ruler, is in the 8th house of death. The Sun is conjunct the Kingdom Fortuna, while this Mars-Saturn is virtually a nodal return for the kingdom. The Ascendant of the 2020 Mars-Saturn activates the kingdom Neptune: not a good combination! 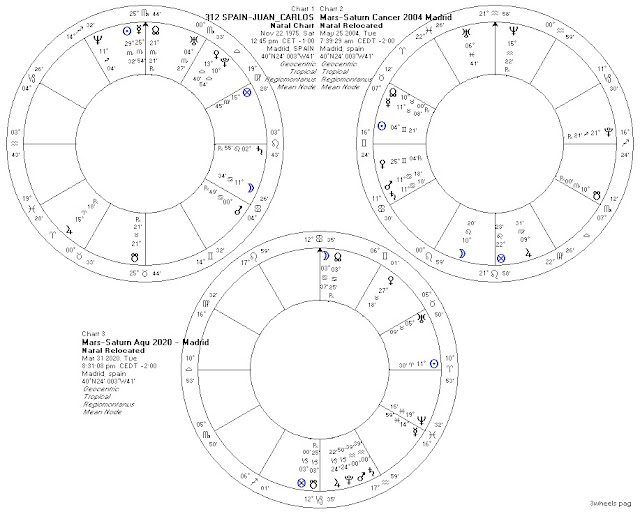 We already noted that the ascension chart for King Juan Carlos (22 November 1975 12:45 pm CET Madrid) has the Moon at 11 Cancer in the 6th house of illness. The Sun at the Descendant for Madrid for the 2020 conjunction is literally a sunset motif, richly symbolic of the sad parade of death in Spain. Mercury and Neptune embracing the 6th house shows the lungs, with the other lung-related planet, Jupiter, ruling it. The ruler of the Ascendant is in the house of death. The image is stark and terrible.

Now we can repeat the exercise for Wuhan. 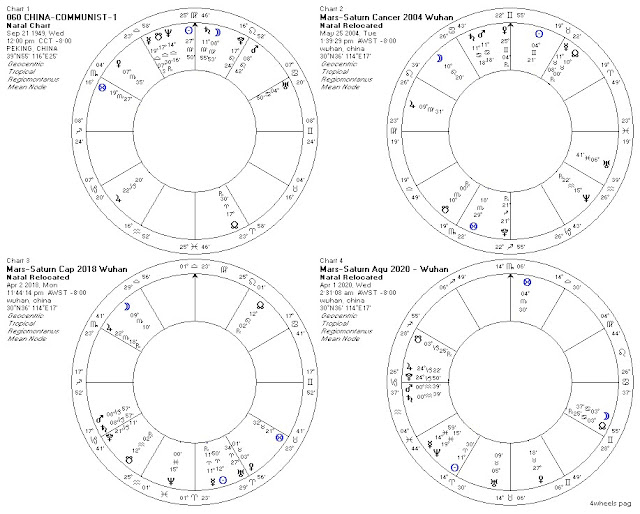 Notice the angular similarity of the 2020 charts for Rome and Wuhan: the IC for Italy is the Ascendant for Wuhan. Unlike the other locations, by the time the 2020 Mars-Saturn occurred, the infection in Wuhan had raged, and was receding. Whatever one thinks about the total number of cases, it’s clear that the bulk of China’s experience of this epidemic fell under the 2018 Mars-Saturn, so we present it here.

The Capricorn Mars-Saturn is the phase shift of the cycle, being opposite the opening Cancer conjunction. One therefore expects that this halfway point would have a certain greater level of importance in the series. The Mars-Saturn 2018 conjunction occurred in the 1st house in Wuhan, with the Sun-Mercury in a partile square to the 2004 conjunction itself. Venus rules the 6th house in the 2018 chart, while the Fallen Moon in Scorpio separates from that Venus, while squaring China’s Mars in the 8th house.
Notice that the Sun in the 2018 and 2020 charts was almost identical: one day off, and both squaring the Mars-Saturn from 2004. These charts do not all lock precisely, but there is a lot of overlap. 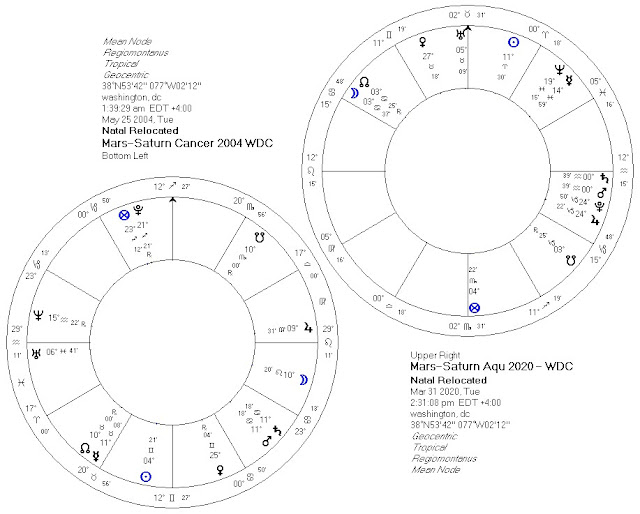 In the 2004 conjunction, which also conjoined the USA Sun, Mars ruled the 2nd house, while Saturn ruled the 1st, showing both malefics active in important places. The 2004 Mars-Saturn cycle also ruled the 2008 recession. The 2004 Mars-Saturn had no planets at all in strong essential dignity, demonstrating a world stretched, and operating from a position of fundamental weakness: With both malefics active in their most negative manifestation, one could easily envision this combination as the rot from within.

The 29 degree fixed Ascendant for Washington shows a nation reluctant to change, while the 1st house Uranus shows that change will happen, especially as the cadent Sun comes to square it. But this is the key: the Sun was cadent, and so the awareness or illumination of the Sun is diminished, probably because the news wasn’t so good. The Moon in the 6th showed problems with labor as well as with health, and this opposition took place at the Bendings (points square the Nodes). What is fascinationg about this pattern for Washington is that it was taking place in succedent and cadent houses, thus out of public view or emphasis. What was it? A large piece of it was the loss of 5 million manufacturing jobs since 2000 which were replaced by generally lower paying service jobs, including in the health care industry, which continued to grow. The USA continues to spend more on health care than other nations, not because it is better, but because health care costs have risen much higher than in other countries. A country with no price controls on health care while patting itself on the back even as quantitative measurements show health care quality dropping looks a lot to me like Moon in Leo opposite Neptune in the 6th and 12th houses!

So into this chart showing major financial realignment and a broken health system rides a 2020 pandemic. The mess of malefics shows in the 6th house of disease, and the ruler of the 8th is in the 6th, showing the danger of chronic infections. But into this mess, now the angular Uranus is in the 10th, not the 1st, showing erratic leadership from the top opposing the fortune of the country.
And yet – the Sun rules the country and the Sun is exalted. Or at the very least, the Sun shines the light on what is going on. In this context, I think the 9th house would represent science, a word seldom mentioned in the current West Wing. But that cadent Sun is partile square the 2004 Mars-Saturn series to which it belongs. Can it prevail? We shall see. 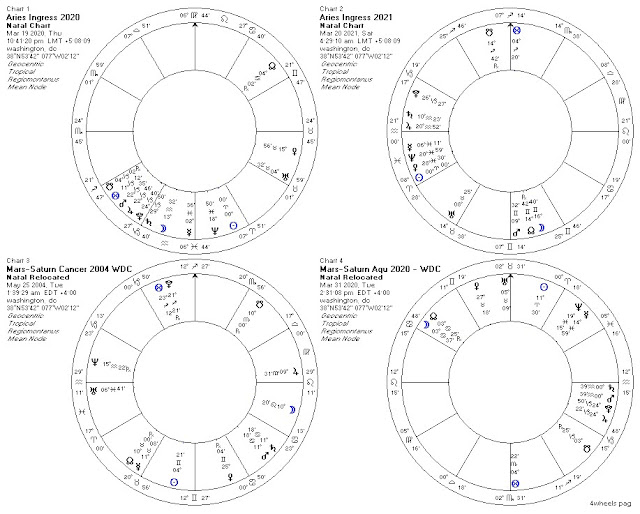 The Aries Ingress for 2020, shown in the upper left, certainly shows the economic impact of the virus (2nd house). Mercury in Pisces in Mars-Saturn conjunction (lower right) shows the economy as depressed over the longer period represented by the 2020 Mars-Saturn. Uranus in the 6th for the Aries Ingress certainly shows the suddenness of the disease spike: but this chart lacks the severity of the Mars-Saturn conjunction on potential mortality.
The 2021 Aries Ingress shows both of these themes still present. Mars in Gemini at the IC shows the state of the economy, and being mutable, it's mixed. The same Mercury in Pisces that denoted death in the 2020 chart here shows one segment of the people (1st) still debilitated, applying to square Mars, the ruler of the 2nd. These people still need financial help because they are weak, and this could also be showing a higher population of people with chronic disease related to the aftermath of covid-19 The ruler of the 6th (Moon) applying to the 8th (Venus) can indicate chronic disease, not death.


But one feature is very different between the charts. In the 2020 Ingress, the president is ruled by Mercury, in detriment, and applying to Uranus in the 6th: being over his head and making erratic decisions. In 2021 the president is Jupiter: out of Fall, and conjunct the 1st, thus being completely aware of what is going on with the country. The preponderance of double-bodied signs associated with the 4th shows the land to be a mosaic of pockets: some areas good, some areas not to good. Recovery does not look like a proportional improvement for all segments of the population.


We have used the Mars-Saturn sequence here to develop the idea that this little-used cycle can in fact provide intriguing information if we use it according to its classically stated purpose: the examination of short-term dangers to communities and nations that extend beyond the seasonal effects of the Aries Ingress series.


We shall examine additional mundane factors in a future post.