As the horror of the Connecticut school shooting has sunk in, the raw emotionality of the event has triggered inflammatory language from people of different political spectra. One of the words that has popped up frequently is terror, as in terrorism. As a second-generation teacher, being a language cop is one of my attributes, so here I wish to consider two questions: can terror truly be the term for a single person acting alone without a political agenda, and, in any case, what does terrorism look like astrologically?

We are confronted with a linguistic issue: terror, we learn, is extreme fright, and certainly there was plenty of that going on at Sandy Hook Elementary School. A terrorist is someone who foments terror, and that could certainly be said for the murderer. The word terrorism prior to the last few decades applied to terror applied by a political entity, such as the Reign of Terror during the French Revolution. Now we apply terrorism to any group that attempts to organize terror as a political statement, whether that group is a state, a political party, or an ad-hoc group. We are left with the position that the mass murderer can probably rightly be called a terrorist, but what he did was not terrorism, it was disgusting mass murder.

So on to our second question: what does terrorism look like? A recent article on the BBC on Operation Condor got me thinking about this. Operation Condor was a coordination of state-run terrorism by six autocratic regimes in South America during the 1970-1980 decades: Argentina, Brazil, Bolivia, Chile, Paraguay, and Uruguay. The purpose was to destroy any leftist opposition. According to documents discovered in Paraguay, the first meeting was set up in Chile on 25 November 1975 - the 60th birthday of reigning General Augusto Pinochet. 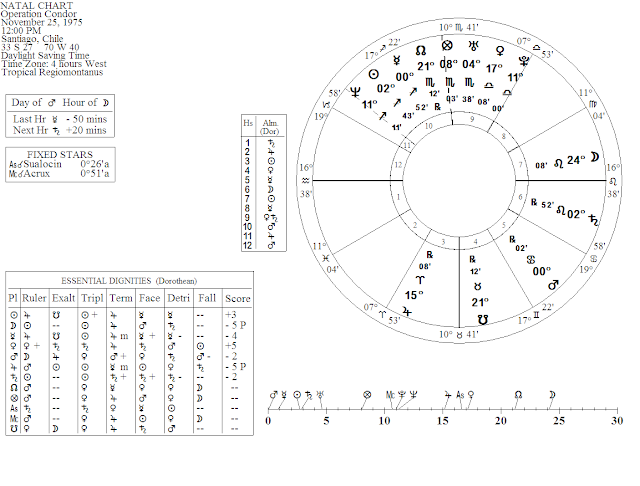 I have chosen to use a noon chart, since the time is unknown, and this follows convention for business and other such mundane entities. So what would terrorism look like? Classically, we would have to look to the three malefics: Mars, Saturn and the South Node. Here, we see the Moon in Leo at the Bendings, and specifically, the South Bending. In Classical Astrology for Modern Living, Chapter 10. The South Bending specifically seems to refer to scape-goating, which is probably an excellent description for the psychology of the dictators who felt such an obsessive need to eliminate anyone who could conceivably oppose their regimes. I find the specific placement in Leo to be incredibly telling: the sign of the king, a sign in which the Moon herself has no dignity at all, thereby showing all the emotional needs, without the strength to back it up. As for Saturn, it's in Detriment, the sign opposite its rulership. A planet in Detriment often manifests the qualities diametrically opposed to what it naturally does. Here, Saturn experiences the ego of the Sun. The Sun itself, the Light of Day is in Sagittarius, where it has Triplicity, and in a partile trine to the Saturn. Saturn is the use of authority in its most rigid and hierarchical fashion: here applied through the lens of personal ego.

Mars, of course, is the planet of violence, here placed in the first degree of its sign of Fall, showing again the idea of Mars energy turned around.So here, all three classical malefics are showing problems. Malefics behaving badly desperately need a positive outlet for the energy, like sprts. Otherwise, left to its own devices, the results can be very tragic.