There is one other cool idea associated with this method: it may give some useful information when the birthtime of one of the partners is unknown or in dispute. Consider therefore the chart of Bill Clinton. Hillary's birthtime is in dispute, and while everybody in the astrological community desperately wants A Data for Hillary, we simply don't have it. So the question is: can we do derived houses with Bill's? 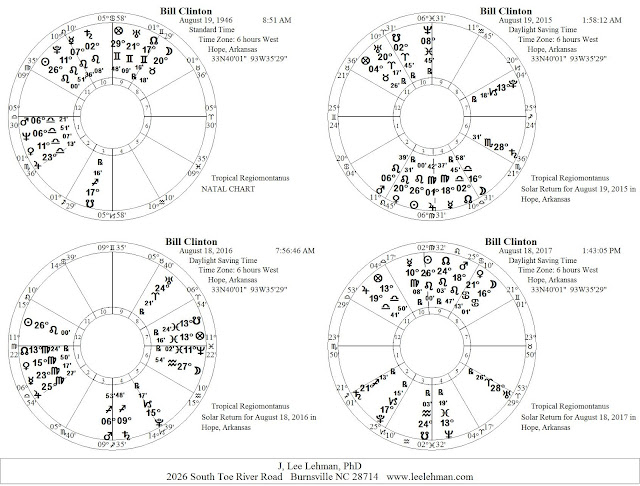 First, if we briefly examine Bill's nativity, we see three very powerful planets: the Sun in Leo, the Moon in Taurus, and Venus in Libra. This is absolutely stunning, especially given that his Ascendant is Libra, and thus ruled by that Venus. I have been told  by people who have met him that they have never experienced such incredible magnetism (some would say sex appeal) from a human being. I think the dignity, combined with  Neptune in the 1st house, explains the magnetism. With the Moon in Taurus ruling the 10th, we see these two cusps critical to worldly success in incredibly strong condition.

But now look at this from Hillary's point of view. The 7th house cusp is ruled by Mars in Libra: Mars very strong, but in its Detriment, but in Bill's house, not hers. Here we can begin to unravel the astrological indicators of  her high negative rating. Hillary was considered too strong and too feminist during his period as Governor of Arkansas, and this continued into his presidency. Now we add the Neptune in a partile conjunction to Mars. This gives someone who may not have the best boundaries about "mine" and "yours" - someone, in other words, who is easily perceived as either glamorous or sleazy, depending upon your point of view. Hillary has been both, from the iconic Secretary of State with Blackberry and shades, to the wife of Slick Willy.

Hillary's 10th house cusp is Bill's 4th by derived houses. And here, the ruler of her 10th is Saturn in Leo: Saturn in Detriment. So from Bill's chart, both of Hillary's important angles are ruled by planets in Detriment! What for him is so very strong shows from her standpoint as equally strong, but also problematic.

Skip forward to 2015 Bill's Sun in his solar return is in the 3rd house: the opposite house to the joy of the Sun. Cadent houses are weak, and here is the description of Bill's solar return for the most crucial period of the Democratic Party campaign! Bill's Ascendant ruler is Mercury, in fabulous essential dignity, and angular.

Hillary is given by Jupiter in Detriment - likewise cadent! Her MC is ruled by Mercury in her 10th house, so that's something. Of course, coming into this year, she was so overwhelmingly favored to win the nomination that it was unbelievable.

But Neptune has a role to play in this solar return - it's conjunct the MC! And through this year, instead of being able to act as Hillary's biggest cheerleader, Bill has been accused of an illegal act in Massachusetts, and has seemingly manifested more foot-in-mouth tendencies than the golden oratory for which he is generally noted. The Moon in Libra is translating the light from Pluto to Uranus, all by hard aspects. This does not look like anything except the incredible slog that this campaign season has been for them, with Hillary's popularity plummeting and conflict within the Party, leading to the question of whether the Bernie supporters will vote for her should she win the nomination.

This solar return will rule the actual Democratic convention. Will there be enough residual name recognition and capital to eke out a win?

In Bill's case the new solar return has the Sun in the 12th house. Now this is simply difficult to see in any other terms except unraveling. It's a Full Moon solar return, shifting from build-up to letting go. Hillary is again ruled by Jupiter in Virgo: in Detriment - and in Bill's house. Now why, when she is the one running for President, should she be shown in Bill's house rather than the other way around, or at least none of the above?

Now we have Neptune partile conjunct Hillary's Ascendant (the 7th house cusp). Does some scandal finally stick? Further, we have the Part of Fortune and the South Node conjunct in her 1st just two degrees away from the Descendant itself: again, that's hard to reconcile in any positive way. And then we have Mars and Saturn, the two malefics, coming to conjunction at Hillary's 10th house (the radix 4th). Again, I just cannot see this in a positive outcome.

There's also a curious configuration in this chart that is not at first obvious. Consider the disposition in this chart. The Sun in Leo (Bill) stands alone. There are no other planets in Leo. Everything else hangs off of Mercury in Virgo. In the classical treatment of disposition, Jupiter in Virgo is received by Mercury, which means Mercury is going to try to help Jupiter. Now, Mercury is highly dignified in Virgo, but Mercury is an inferior planet: having to carry Jupiter in Detriment on its back is rather like the image of an ant trying to carry a corn kernel. That worker ant is under stress to say the least! Now add all the other planets to Mercury's back, and Mercury is simply going to go splat! Too much stress, especially when the two immediate dispositions, Venus and Jupiter, are both in debility. But that Mars-Saturn conjunction is received by Jupiter, which is received by Mercury - and the Moon is received by Saturn. You get the idea! Poor Mercury is going to feel like a ton of boulders has descended! In this chart Mercury is Bill himself, because Mercury rules both 1st and 10th. Everyone and everything, including his wife, devolves to him.

Again, this just doesn't look like Hillary riding high in a campaign that was supposed to be a coronation. In fact, the more I looked at the chart, the more I realized that this chart is, in the description that I gave in Traditional Medical Astrology, an exit visa for Bill. An exit visa is a year where the issues are so severe, that death becomes possible. Here, with that Saturn at the IC being conjoined by Mars and ruling the 6th, illness cannot be ruled out.

If Hillary can somehow pull off a win under these circumstances, the Mars-Saturn looks like a miserable set-up to the beginning the presidency. And Bill at that stage would be absolutely exhausted, if not worse.

If Bill can make it through 2016, his 2017 solar return is much better. Now his Sun is conjunct the 10th from the 9th, a much stronger position, especially as the Sun joys in the 9th. Hillary is Venus in Cancer, where she has Triplicity, and in her 2nd house conjunct the Moon in Cancer. Perhaps once again, she is giving speeches to donors and corporations, and thus fulfilling the promise of her 2nd house.

We shall soon see just how much use a husband's chart with A data can be used to predict a wife without!