And on the Republican side, Part 1

I recently wrote about two of the Democratic Party presidential announcements, so now, that leaves the Republicans for examination. And of course, there were a lot more of them! This article takes up a selection. Since most of them are now gone, we can perhaps reflect more fully upon the results. So here they are, largely in alphabetical order. 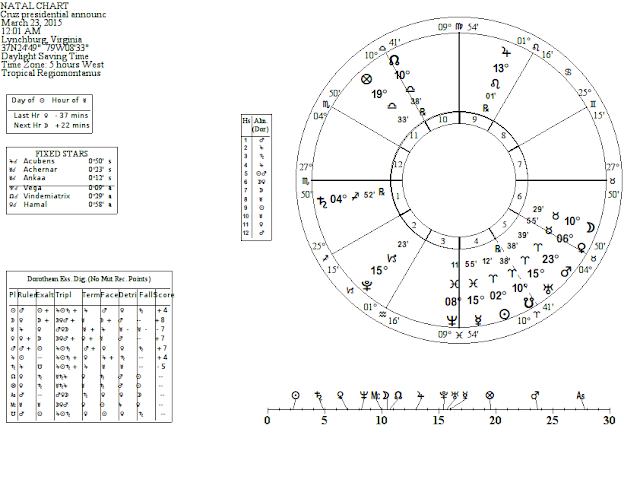 Ted Cruz made his announcement electronically, hence the time. So first, we may ask, as an electional proposition, if a midnight time seems appropriate for this endeavor. Since the Sun is a natural ruler of kings, this would seem a fair question, since what we are talking about is really the election of a temporary king. Granted, the Sun is angular, but the midnight angle seems the least associated with the job. Since he is announcing, he is given the 1st house, and Mars in Aries as a ruler looks exactly like he is: a combative man with a penchant for attack, and some skill at it, given the dignity. Actually, this chart has quite a bit of dignity, with the Moon and Venus in strong dignity. Venus rules his competition (the 7th house). Venus, however, is cadent, while Mars is succedent, giving the edge to Mars. In contest charts, however, it is often the debilitated malefics that are ultimately the most successful. It is Mercury which is debilitated, so perhaps this shows the tendency of hsi campaign to release falsehoods about his competitors just before primary votes. Neptune conjunct the IC would seem appropriate for a man who is appealing to the evangelical vote. 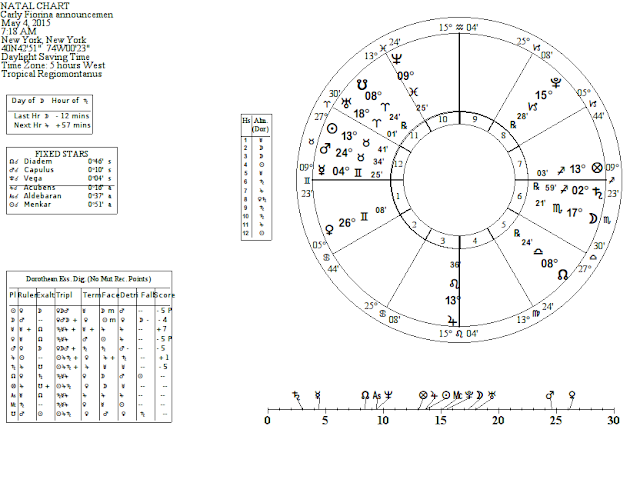 Carly seemed to only be able to project a single focus: fabricated delusions of what happens at PLanned Parenthood clinics. A controversial former chief executive of Hewlett Packard, her candidacy briefly appeared to achieve some traction before collapsing early in primary season. It's difficult to envision an electional chart with the Moon in Scorpio as providing success except ina  very narrow range of endeavors, and only then with strong natal support. Double up Moon in Fall with Mars in Detriment, and you have an attack dog, but not a serious candidate. With Mercury ruling the Ascendant, she did really have a message, and Mercury was even dignified. With it in the 12th and opposite Saturn, it was not going to be effective in the long run. 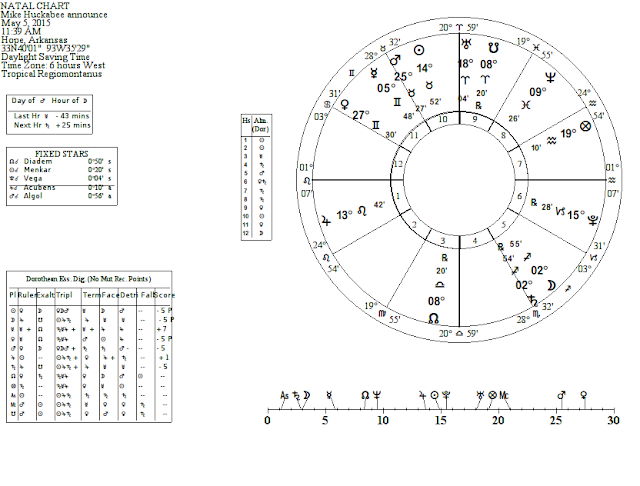 Mike Huckabee, former Governor of Arkansas, evangelical minister, and  Fox commentator, decided to run again for the presidency - he had last attempted it in 2008. Here, we see Leo rising - the ego factor, we might infer, with the Sun in the 10th - a better placement certainly, but peregrine in Taurus. Mars, ruling the 10th, was conjunct the fixed star Algol, hardly a star for success. 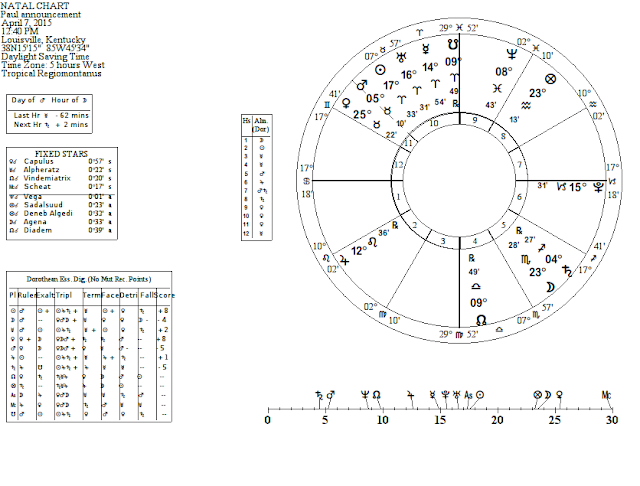 If Huckabee had Algol, then Rand Paul had Scheat, in this case, conjunct the Midheaven, one of the few stars which competes head-to-head with Algol (sorry!) for balefulness. Unlike his past performance, Paul never seemed to get off the ground this time. The Moon, ruling the Ascendant was in Scorpio, a double whammy, and even going to oppose Venus, normally lovely in Taurus, but conjunct Algol. Simply amazing. 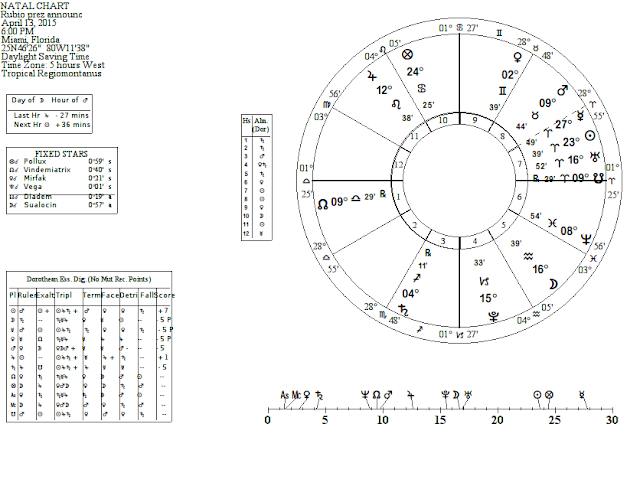 As we accumulate these charts, one might think that announcing in Aries, with the Sun exalted, might be a very good plan. Often, things do seem rather to look up as Spring rolls around. But here, the Sun is in the house of Rubio's competitors, and either Venus or Saturn rules him, depending upon whether you prefer Libra sign ruler Venus or its Almuten. Venus is peregrine; Saturn has mixed Triplicity and is retrograde; both are cadent.Rubio was thus never master of his own fate. As it happens we have the moment that he went off the rails: when Chris Christie slammed him during one of the Republican debates for being a robot - and he just stood there and acted robotic. 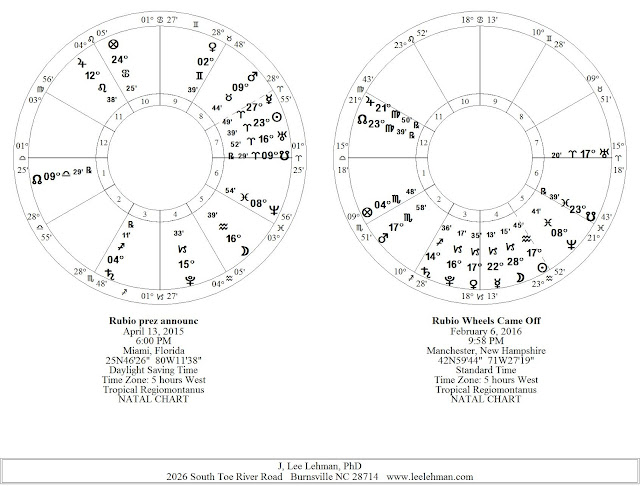 It is interesting that the Sun what in effect was the end of Rubio's run had just passed the Moon of his declaration. This chart also puts the lie to the idea that "nothing can come of" a void of course Moon. Here, the Moon passed into void by separating from Mercury: an interesting observation, since Rubio was undone by words, not deeds. That void Moon had even more recently separated from the Mercury of the declaration chart, and the opposition to the Part of Fortune of the declaration chart.

The cut-throat nature especially of this year's completion reminds us that this contest is very much more of the nature of the Sun than the Moon. As such, I thought to consider the Part of Spirit, which is really the Part of the Sun, for this chart. It was at 7 Sagittarius, butting it square to Neptune. Now, I don't think I would elect that! Curiously, when Rubio was taken down, Neptune had made a return to the degree of Neptune for the declaration, again highlighting the conflict with Spirit.


Of the Republican charts we have examined so far, Cruz's looks the best, which matches with the results that we have observed. What we have not been able to do is to correlate these charts with the candidates' nativities, an essential point when we consider these as being of the nature of electionals, because connection to the nativity can have a radical impact on the ability of the time to operate to the benefit of the participant.