A Bad Time to do It

After a bruising confirmation process, Brett Kavanaugh was confirmed by the US Senate as the next US Supreme Court Justice. This is an issue over which, seemingly, every American has a strong opinion. The hard part, as an astrologer, is to attempt to be objective: a skill which is vital to our consulting skills, and often minimized in the rush to encourage astrologers to act like psychologists. In fact, there is a huge value to objectivity during a session. The delineation of horaries and electionals for clients would be impossible without it. I am certainly not throwing compassion, empathy, and imagination out the window, but facts are also facts.

I too have an opinion on Justice Kavanaigh. But my role in this blog entry is to examine his term of office. And ion the mundane/electional work that I do, my first question is simple: when did he become a Supreme? Approval by the Senate is mandatory, but the Justice does not take office until s/he takes the oath of office. In Kavanaugh's case, this was a private ceremony, and no official time has been forthcoming. In fact, it was difficult to find the time of the ceremony at all, and only USA Today gave the time of 6:00 pm as the time of the private ceremony.  Unless one of the participants shares the exact time that Chief Justice Roberts administered the oath, we can only guess. But we may also presume that it probably wasn't too much after 6 pm, since this was a private meeting, and hence not subject to the inevitable delays that cameras, reporters, and multiple witnesses can create. So while I present a chart for 6 pm, my assumption is that it was perhaps a few minutes late. 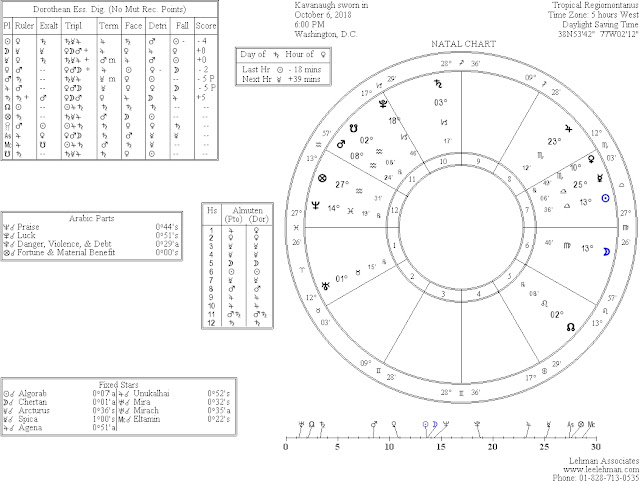 If this is accurate, then indeed this is an interesting chart. First of all, the late degree rising is interesting, because that is the reverse of what we would expect. Justice Kavanaugh, being relatively young for a Supreme Court Justice, would be expected to occupy the bench for decades: this was part of the rationale for the intensity of the fight: that this man would be in place for a long time. But a late Ascendant means exactly that: that this is late in the process. If the oath was really administered after 6:06 pm, then we have instead an early Aries rising chart - and so I am going to delineate this chart both ways, because now we should be able to pick the more correct chart, once events unfold.

If the time is correct, or even a few minutes late, then Jupiter rules the Ascendant. For a judicial swearing in, the choice of planet would be highly appropriate: the "problem" is that Jupiter is peregrine, and in the 8th house.  By this reckoning, Justice Kavanaugh truly becomes a hidden enemy of the Court (judicial matters are 9th, and his significator is in the 8th, which would be the 12th house from the 9th). One might also note that Jupiter is a generic marker for the nobility, so this also would describe his privileged upbringing. However, the fact that Jupiter is peregrine would show that while he came from privilege, he himself doesn't actually have it - meaning, he's got the background, but not the monetary resources.

The late Ascendant suggests his time on the Court would be short, no more than a few years. The proximity of the Ascendant to the fixed star Sheat would make this appointment a shipwreck.

One more point: the 10th house in this swearing in is now Chief Justice Roberts. In most national charts, we would take the President as the 10th, but by the action of this chart, President and Congress have already dropped out of the picture. Justice Roberts is initially shown as being ruled by the same peregrine planet Jupiter.

Here we may surmise several interpretations. Being ruled by the same planet, we might presume that they have similar judicial philosophies and outlooks - and this is probably largely true. However, the bulk of the degrees of the 10th house are ruled by a very dignified Saturn, and so we may allow for this to represent Chief Justice Roberts when he and Justice Kavanaugh are acting independently. In this guise, Chief Justice Roberts is the older man (Saturn), with great dignity, which means he comes across as very jealous of his office and duties as Chief Justice (Saturn, protecting his own authority), and generally believing in the idea of seniority. Now, we see the two men not acting precisely in concert, with Chief Justice Roberts willing to assert himself.

In summary, with a Pisces rising chart, Justice Kavanaugh probably does not last very long in his post until he is shipwrecked, and his tenancy may well be negative for the reputation of the Court.

An Aries Rising chart means different significators for both Kavanaugh and Roberts. Kavanaugh's significator is now Mars, and Roberts is now unequivocally Saturn. Mars is also peregrine, so either significator challenges the notion that Kavanaugh will have a big influence on the court. Both potential significators are succedent, suggesting mean or moderate influence. Not being angular, his presence does not stand out.

There is a big difference in tone, however. If Jupiter, Justice Kavanaugh will attempt to appear judicial, whereas if he is Mars, he will continue to appear as a fighter.  In either case, he will find it difficult to lead.

If Mars rules the Ascendant, then Chief Justice Roberts will appear even more powerful, and will move forcefully to assert the legitimacy of the Court.


Whether Mars or Jupiter rules the Ascendant, Venus in Detriment retrograde rules the 2nd. If Mr. Justice Kavanaugh had any expectations that joining the Court would improve his finances, this chart argues against it. I would suspect that the savagery of the resistance will mean that his finances are severely scrutinized, and he may well discover that his expenses are increased. If the chart is Aries rising, then the double applying square of Mars and Venus truly speaks to financial problems, whereas this would be considerable reduced with Jupiter ruling the Ascendant.

So which will it be: short term, or financial problems? Either way, this does not look like a happy chart.

Note: subsequent examination of the photos from the private event by Christopher LaFond show a time for the swearing in by Chief Justice Roberts of 5:58 pm.
Posted by J. Lee Lehman at 4:50 PM