©2013 J. Lee Lehman, PhD
The New York Times has just published a feature on Warren Buffet with a very curious twist:  a discussion of how, after decades of consistently beating the market, Mr. Buffet has somehow lost his touch. The question for us as astrologers, is obviously: why?

Mr. Buffet's genius was defined, both by him and by others, as being able to outperform the market. Seemingly, that ability vanished in 2009. Since we are now talking about more than three consecutive years, we have probably moved beyond the realm of a specific transit, direction or progression. 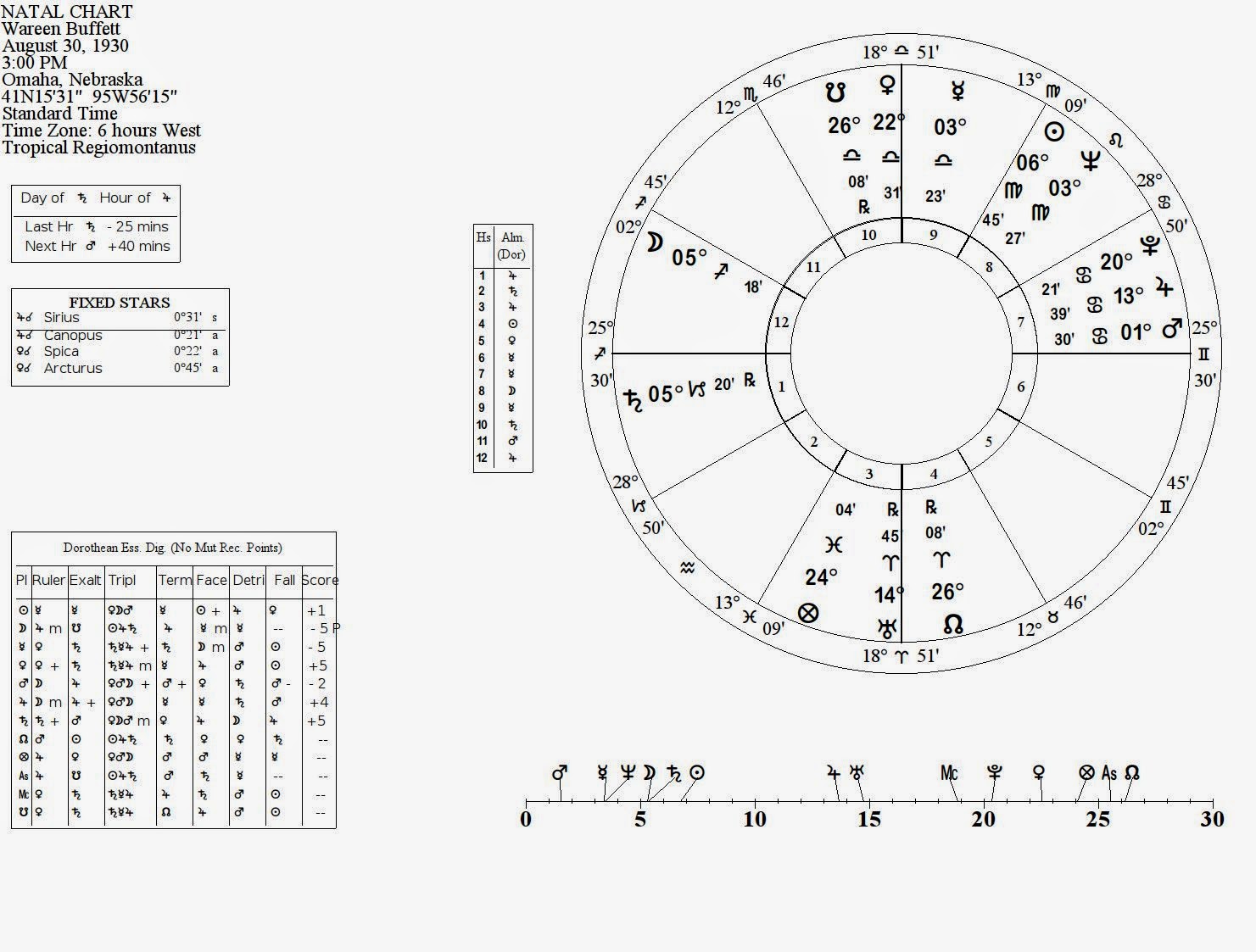 In his nativity, we see that the two most dignified planets, Saturn and Venus, rule two important houses from the standpoint of his investing: the second, and the fifth. The 2nd represents cash wealth, and the 5th gambling: a house most astrologers consider appropriate for playing the stock market. In Buffet's case, Venus and Saturn are also in mutual reception by Triplicity: these two planets work well together. Venus at the 10th house suggests celebrity is possible for its efforts: the New York Times piece points out how rare it is for someone of his profound abilities to be known to the public, but his Berkshire Hathaway Fund has been legendary. Furthermore, Venus was conjunct Spica, surely the most benefic fixed star in the ancient pantheon.

I would note an interesting condition of Saturn: its dignity and retrogradation. It's easy to call a planet retrograde as one having a twist. Buffett's amazing ability to outperform the market has to count as one of the most stellar twists of modern finances!
I believe that his Sun-Neptune conjunction trine 1st house Saturn allowed him quite a bit of intuition into matters often represented primarily as dry numerical figures and statistics. Furthermore, the heavy emphasis on cardinality in the chart surely helped him avoid that great temptation of traders: to fall in love with a stock. His combination of dry earth Sun and Saturn hooked up with Neptune in an earth sign is a most fascinating harbinger of psychic engineering.

Is there anything we can say to suggest why his streak as ended, at least for now? I believe we have an intriguing possibility. The timing corresponds to one particular aspect of a larger phenomenon: the ingress of Pluto into Capricorn. We know, of course, that Pluto went into Capricorn on 27 November 2008. In my book, Astrology of Sustainability, I discuss the often dramatic events that occur within the time period when Pluto changes signs. In Buffett's case, Pluto in Capricorn begins to impinge upon his 1st house Saturn, which rules both his 1st and his 2nd: a very crucial planet from the standpoint of his identity and his financial portfolio. Had this ingress occurred earlier in 2008, it might well have affected his 2008 outcome as well. But enter 2009 and suddenly, his Midas touch was gone.

Now, in my own mind, I believe that 2008 marks a point of no return in the extent to which the markets are no longer that sensitive to any individual investor, even such a large one as Mr. Buffett. I believe that the increase in computer-driven trading has completely changed the game, and that in this case, our subject simply could not keep up with this change.

So: can we hypothesize about whether the magic can come back? We may note that this lingering Uranus-Pluto square is all over his outer placements, with the first pass in 2012 of the square occurring the degree after his Saturn placement, and with the final square in 2015 occurring just past his own Uranus, and thus ringing in his Uranus return. I would venture to suggest that it was probably about the time that the square began to form that he began to understand that he wasn't just having a spurt of a couple of years of bad luck. I would suspect that, with the relative proximity of his Pluto opposition beginning in 2018, that he may not be able to reverse his streak until then.

In any case, this is an interesting exercise, because we simply don't have a good database of exactly what happens at the Pluto oppositions, because it's been so long since the last period when Pluto was moving quickly enough for us to experience it. And of course, we don't know whether Mr. Buffett will have retired by then, or even if he will still be on the planet.

However, given the magnitude of his influence among traders and historians of the market, I would venture to suggest that a corollary of this observation is that it may take until 2018 before people, traders, and the government actually fully recognize and address the idea that the current system of computerized trading has completely marginalized the individual trader - just another example of the plutocracy theme associated with Pluto in Capricorn.

And as astrologers, in the meantime, we may have to consider whether the stock market even qualifies as a 5th house entity any more. What we are experiencing now is more akin to loaded dice, where the House is benefiting far more than it should.
Posted by J. Lee Lehman at 8:19 PM

I have heard the Feds are looking into computer trading done by financial wizards. However, since this has been around for many years I doubt if the public will benefit. After big banks, investment houses, and corporations have fleeced their trillions from us, the SEC rakes a fine to the governments' pocket. Our taxes at work.

Lee did not give a source of the birth time for Buffett. A few years ago I tried rectifying his chart using Vedic astrology and I concluded he had to have Saturn in the first house. Here are some comments on his chart from a Vedic perspective.

The Vedic chart uses sidereal zodiac (subtract 24 degrees from tropical) and whole sign houses. The rising sign is 2:34 Sag, Moon is 12:24 Scorpio in the 12th, in Anuradha Nakshatra, a Saturn-ruled asterism. The timing in Vedic astrology is chiefly by the dasha system. Using the Vimshottari dashes based upon the Moon Nakshatra, he entered Rahu (North Node) mahadasha in 2003. Within the mahadashas are proportional subdashas (bukthis) and he entered Rahu/Mercury in Sept 2011 through March 2014. Mercury is exalted and placed extremely well in his 10th house, but it also rules the 7th and thus is a potential indicator of serious illness or death. I think something may have happened health-wise at that point. He is now in Rahu/Ketu (Ketu being the South Node) bukthi, a cycle often associated with loss or illness.

The most important transit by far in Vedic astrology is the 7 year transit of Saturn through the Moon's sign and the houses on either side of it (Sadi-Sati). Buffet has Moon in Scorpio and Saturn in Sagittarius, and was thus born under Sadi Sati. Unlike most of us he sailed through his 3rd Sadi Sati in the 1990's without much ill effect. He will enter his 4th and probably final Sadi Sati in November, 2014, when transiting Saturn enters sidereal Scorpio. I think he will progressively fade from public view after that point, though I wouldn't rule out some figurehead public appearances.

Other important Vedic transits are: Jupiter, which has been in sidereal Gemini in this 7th, entered Cancer, his 8th house, last week. The past year there has been a focus on his partners and whoever will run the company after him. Mars is retrograde and stations in sidereal Virgo in his 10th house this summer, and Rahu (North Node) enters Virgo going retrograde on July 7. there will be a lot of 10th house activity for him this summer and early fall but then he is through, I think.

Vedic astrology does not traditionally work with the outer planets, but Lee's comments on the Pluto in Capricorn influence here must be taken seriously. For research purposes I plan to find and track the Berkshire Hathaway incorporation chart if I can find it.