The KitchenAid Mixer and Pluto in Capricorn

Much of the text of Astrology of Sustainability is devoted to understanding from a mundane perspective how Pluto's passage through the signs really works. My historical analysis demonstrated that there is a lag phenomenon, a period of years in which the majority of people attempt to operate under the rules of the old Pluto sign. This period that can easily last years in the case of Pluto: probably as long as a quarter of the cycle, or more. When I was writing that book, Pluto was earlier in Capricorn than it is now. One thing I did say was that the transition of Sagittarius to Capricorn is about the most wrenching of the sign transitions, because the transition goes from Jupiter-ruled to Saturn-ruled, and people vastly prefer the openness of Jupiter to the rules of Saturn.

Here, having just witnessed Obama's reelection under the shadow of Pluto in Capricorn, there are some thing that are worth reflecting upon.In Obama's campaign in 2008, the watchword was change. This made complete sense, given Pluto's recent ingress into Capricorn. In Chapter 1 of Sustainability, I give the historical precedence for why we should take the first pass of a planet into a sign as the beginning of that sign period, even if it later retrogrades into the prior sign, Pluto went into Capricorn for the first time on 26 January 2008. Just how likely is Pluto to change signs during an election period? The last time this occurred was 1956, and the prior time was 1912. The next time will be 2066. So this has only happened twice before. So what was special about those elections? Woodrow Wilson won the 1912 election as a result of the Republican Party splintering between President Taft, and former President Theodore Roosevelt: in that era, the only time the Democrats could win the presidency was when the Republicans were too factionalized to agree on a single candidate. Despite the great disadvantage for national office of the Democrats at that time, Wilson won reelection, becoming one of the roughly 2/3 of presidents who ran for reelection who won. The other case was Dwight Eisenhower, an extremely popular president, running for reelection, who easily won a second term. So our very small sample size of two cases shows that when the Pluto sign change comes at an election with no incumbent, the other party not only has a good chance of winning, but of staying in office for the next term as well. The sign change in Wilson's case was from barren Gemini to fertile Cancer, from Mercury-ruled to Moon-ruled. This is a change, but it's not so dramatic as Jupiter to Saturn. In Eisenhower's case, it was Leo to Virgo, Sun-ruled to Mercury-ruled. Again, this is hardly wrenching.

What has struck me, now living through this process, is that over a quarter of the way into Pluto in Capricorn, I am still observing lots of phenomena that I would classify as leftover Pluto in Sagittarius thinking. Many of them have to do with the economy or economically-based decisions, whether personally, corporately, or governmentally. Let me explain.
Which brings me to the KitchenAid mixer. Back in 2011, my partner Maggie bought a KitchenAid mixer. Not that she wanted to: her previous mixer had a burned-out motor. However, she got an incredible deal on it, and so she bought it. We did not elect a time. 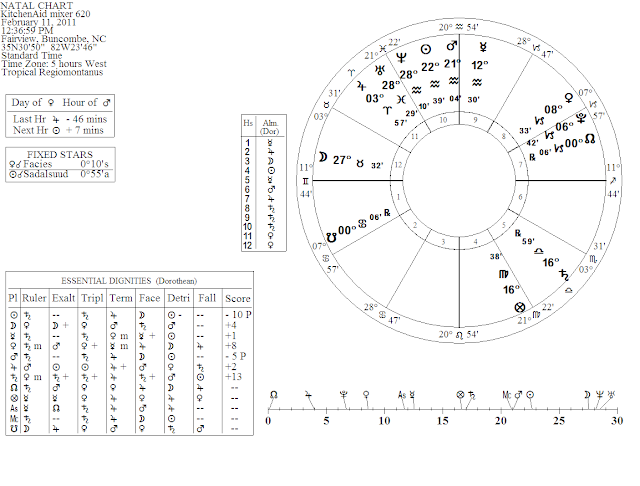 How do you interpret the chart? First, the time was easy: we took it from the e-mail confirmation that she received from Chef's Catalog. We did not examine the chart at the time. However, looking at it now, the 1st house represents the subject of the event, namely the mixer, and we see the South Node there: not a good sign. The Moon was in Taurus, which we had probably noted at the time in a vague sort of way.However, this chart hangs upon Mars.

Why Mars? Mars is the motor! In a mixer, it dies when the motor gives out, because most of the other components are replaceable. Go onto EBay, and you'll find just about every attachment available. Similarly, you can get many parts from the manufacturer.Here, Mars was peregrine and combust. There was some debate in the Medieval period about whether Mars combust was an accidental debility at all: here the suggestion might be that it may not be as bad as another planet combust, but it certainly doesn't help! That poor Mars is the most elevated planet, and it's a Mars hour, torquing up the importance of Mars. But this is a weak Mars.

So a couple of weeks ago, Maggie went to make bread, turned on the mixer, and the sound was like a car battery dying. One dead motor. The value of the Moon in Taurus was that Chef's Catalog replaced the mixer with only the difficulty of the confusion of the Mercury retrograde period, in which they got it confused about whether she wanted a refund or replacement.

So now, we come back to Pluto in Capricorn. When she got the mixer, even though the model number was the same, it felt different to her. One of the blades she had bought wouldn't fit. I felt the included blades: and they felt lighter weight. In fact, when she bought the mixer, she had bought an extra bowl, and when we weighed the old bowl and the new bowl, the difference was over two ounces lighter for the new bowl.

As we have been seeing for some time, corporations are finding all the ways they can cut manufacturing costs to maximize their profits. Everything about this new mixer is cheaper - and yet its price in the Chefs Catalog has risen about $100 in the less than two years since Maggie bought it, in the midst of this very inflationary period! This is Pluto in Sagittarius thinking on the part of KitchenAid: build cheaper equipment which dies sooner, but has nifty features, thereby hopefully encouraging the customer to buy the latest and greatest because of its still sexier features.

How long before corporations "get" it? Also in Astrology of Sustainability, I discuss the agency of outer planet cycles for change - specifically, that we are in a period until 2020 with no major outer planet conjunctions. Evidently, we are all likely to be slow learners for a while.

Also, the Moon is on the nasty star Algol, and she rules the second of personal possessions, money etc.