The 1848 Uranus-Pluto Conjunction and Franz Joseph of Austria

1848 rattled Europe more than anything since the French Revolution – and for many of the same reasons. To begin with, Karl Marx and Friedrich Engel's Communist Manifesto was published. Riots, uprisings, revolutions and protests broke out across Europe: France, Hungary, Germany, Italy, and the Balkans. The California Gold Rush began. Switzerland, France and the Netherlands got new constitutions. And Wagner began writing Der Ring des Nibelungen (the Ring Cycle). And furthermore, the Irish potato famine was still running its course, resulting in staggering death and emigration.

Examining the chart for 1848 for Vienna (the angles will obviously differ in other parts of the globe), the Sun was in a partile conjunction to the South Node! One of the symbols of the Sun is the king: and here, authority figures were being destroyed – or at least challenged. In much of Europe, this conjunction occurred in or near the 10th house cusp, reinforcing that theme. The Aries Ingress was just a few hours after a Full Moon eclipse. The very powerful signature rocked the establishment of the time – but mostly, it didn't break. By now, Pluto was at 25 Aries – it had mostly run its course through the sign. The remainder of the period would be devoted to the reactions of the establishment to the challenges of 1848. The German rebellions were done by 1849. Hungary declared independence from Austria in 1849 – but that failed because Austria was victorious – with a little help from Russia. The new republican government in Sicily was extinguished in 1849. And in 1851, Louis Napoleon dissolved the National Assembly, a move which allowed him to declare himself Napoleon III the following year.


When we compare 1848 and 1849, here drawn for Vienna, we see the difference between the South Node and Saturn afflicting the Sun. What's the difference, since both are malefics? The South Node is destructive – and that eclipse doesn't help. Lest you assume that this is a common occurrence – think again. From 1500 – 2050, this
is the only year that the Sun was partile conjunct the South Node at the Aries Ingress. In two other years, the South Node was within a one degree orb, but in Pisces: 1513 and 1755. 1513 was the year that Machiavelli wrote The
Prince, an influential document on the nature of kingship! 1755 was the year of the Lisbon Earthquake, one of the deadliest earthquakes ever, especially when one factors for the relative population size then and now.


By contrast, there have been five other Aries Ingresses since 1500 where Saturn was within two degrees of conjunct the Sun. Here's how they worked out:


As one can see from the list, the presence of Saturn conjunct the Sun alone doesn't depose a king. With the exception of 1643, these were all peaceful transfers of power – or confirmation of power, in the case of the Treaty of Augsburg. One does get the sense that it may be setting up a final run, so to speak. 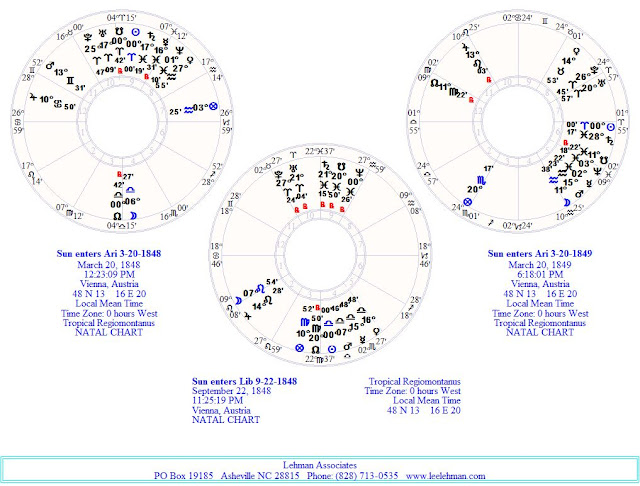 Austria was a good case in point. The political unrest of 1848 cost Metternich his job. The Emperor Ferdinand was ineffectual, the Hungarians were already rebelling, and also portions of Austrian-ruled Italy. The military wanted a strong Emperor, so they arranged for Ferdinand to abdicate, to be replaced by Archduke Franz Joseph, his nephew. The unrest of 1848, not to mention the war on two fronts, meant that Franz Joseph was initially forced to grant a new constitution in 1849 – and to give the impression that he was a moderate or a reformer. Austrian forces were victorious in Italy, and Franz Joseph obtained aid from Russia to defeat the Hungarians. He then repudiated the constitution, and ruled from the position of absolutism, until his death in 1916 – not quite the last Emperor, but within two years of being so.


Franz Joseph's ascension occurred under the Libra Ingress of 1848. Here, we see Saturn-South Node prominent at the MC, with the Sun at its Fall at the IC – not an auspicious place, for a new reign. But Saturn blanketing the MC does not suggest that reform was really on Franz Joseph's mind. The MC ruler was Jupiter in Leo – that looks far more like the absolutist that he became than the reformer he at first appeared to be. And he became quite popular, the people represented by the Moon in Leo is approaching the conjunction to the Emperor.

The Saturn-South Node conjunction at the MC did show that things were beginning to unravel. Franz Joseph's only son died in a tragic event, probably a suicide. His next successor, his nephew Franz Ferdinand, was assassinated, triggering World War I, as we saw in the last chapter. Yet Jupiter has dignity by Triplicity: he had a long reign personally.


The chart for 1849 for Vienna shows that Austria's enemies, ruled by Mars in Aquarius, were not so strong as Austria – Venus in Taurus. That Venus also ruled the 9th – and there, his strategic alliance with Russia sealed the victory over the Hungarians.


As an aside, we have already seen that legislatures are ruled by the 11th. Here, the ruler of the 11th – the Sun – is at the Portals of Death – the 7th house cusp – open enemies, not only death. Franz Joseph's victory over the Hungarians effectively killed the power of the legislature.


Thus, we see that, while the Uranus-Pluto conjunction of 1848 had the promise of rebellion about it, that rebellion wasn't stable, and in the immediate future, produced a conservative backlash. Uranus allows people to have a taste of change - but it does not give the guarantee of change.
Posted by J. Lee Lehman at 1:11 PM 1 comment: